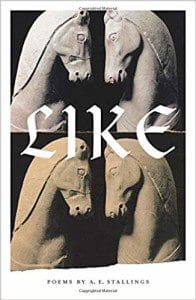 Reading A.E. Stallings’ new book of poetry, Like (137 pages; FSG), my first impression was a furious delight at the way she invigorates the old forms and makes them sing. No one else I know can breathe such life into rhyme, can elevate the mundane to the mythic, the prosaic to the transcendent. The diction is often deliciously at odds with the form—contemporary slang set off against the myth of Pandora, for example:

He’d said she was a punishment from Zeus,
And that virginity made for a sour dowry

Depreciating as soon as you drove it off the lot.

The unexpectedness of the phrasing is part of what makes these poems so lively. They overflow with Stallings’ wit, her love of words and wordplay, and her immersion in Greek literature. These inform and transform the everyday from how to clean a cast iron pan (“Cast Irony”), to scissors, to a lost Lego brick, to insects, gardening.

“Bedbugs in Marriage Bed” is a perfect example. On the surface, this clever sonnet is a deft and amusing explication of an infestation of pest, but underneath, the uncertainties of marriage itself come into question:

Nothing for weeks, for months, but still you frown:
You still wake up at half-past dawn each day
When darkness blanches and the stars go grey.
Who knows what eggs are laid deep in your dreams
Hatching like doubts. They’re gone, but not for good:
They are the negatives you cannot prove.

This book is rich with form: villanelles, sonnets, syllabics, terza rima, and no one could accuse Stallings of writing without an ear for meter, assonance, and rhyme, even when the form isn’t standard. But what makes Like so thoroughly appealing is the mix of the contemporary into the form. A few examples:

The washing machine door broke.   We hand washed for a week.
Left in the tub to soak    the angers began to reek.
And sometimes when we spoke   you said we shouldn’t speak.

Dyeing the Easter eggs the children talk
Of dying, Resurrection’s in the air
Like a whiff of vinegar. These eggs won’t hatch,
My daughter says, since they are cooked and dead,
A hard-boiled batch.

The hours drained as women rearrange
The furniture in search of small lost change.

And all choice, multiple,
The quiz that gives no quarter,
And Time the other implement
That sharpens and grows shorter.

There are several themes that run through this book: myth, The Odyssey, the tedium of life with small children (where “minutes are not lost…but spent”), and the crisis of immigration across the Mediterranean, set against a comfortable family life on those same beaches. (Stallings lives most of the year in Greece with her husband and children). Of all the poems in the book, those dealing with the horror of dead immigrant children seem the least successful to me. Even with her impressive tools, it’s hard to get beyond mere reportage. Of those, my favorite is “Empathy,” a sort of hymn to gratitude that ends:

Empathy isn’t generous,
It’s selfish. It’s not being nice,
To say I would pay any price
Not to be those who’d die to be us.

One of the most beguiling sequences in the book is “Lost and Found,” a 36-part poem that circles around the hunt for a small lost toy, taking us from daily tedium through a Dante-like encounter with the muses, and features Mnemosyne, the mother of the muses. The quest moves between the everyday and the epic, ending in a sort of ars poetica:

I saw the aorist moment as it went—
The light on my children’s hair, my face in the glass
Neither old nor young; but bare, intelligent.
I was a sieve—I felt the moment pass
Right through me, currency as it was spent,
That bright, loose change, like falling leaves, that mass
Of decadent gold leaf, now turning brown—
I could not keep it; I could write it down.

There are several poems that take their inspiration directly from The Odyssey, and one long poem called Cyprian Variations that I am not scholarly enough to comment on. But even without knowing the source, it’s easy to enjoy many lovely moments, such as, “Even the coffin maker is induced/To dread the mass produced,” or St. George’s dragon “Brandishing its wings/Like an endangered bird,/Scarlet and irrelevant and feathered.”

There are many treasures in Like, “Sunset, Wings,” “Swallows,” “Parmenion,” and the previously mentioned “Ajar” and “Bedbugs…” among them. Though not every poem is successful, even those that don’t work as well are apt to have a ravishing phrase or two. It’s invigorating to read a poet who can make form new, unique, and alive.