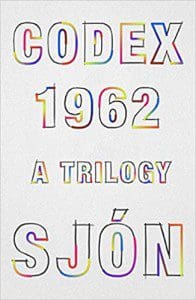 In CoDex 1962: A Trilogy (515 pages; MCD/FSG), premier Icelandic novelist Sjón manages to transcend conventional genre expectations while still engraining himself within the rich tradition of fables and fairy tales. The trilogy of books, first released to great acclaim in Iceland in 2016, was written over the course of 25 years, with the story itself spanning from the early 20th century to modern day.

For the American release, the author has combined all three novels into one book, designating a genre to each section: Thine Eyes Did See My Substance (A Love Story), Iceland’s Thousand Years (A Crime Story), and I’m a Sleeping Door (A Science Fiction Story). Despite these labels, Sjón does not confine the writing within these respective genres. The prose, translated by Victoria Cribb, exhibits the timeless cadence of a Grimm Brothers’ tale, yet is suffused with a profound nuance and ambiguity that evokes the surreal quirkiness of Italo Calvino (especially his Cosmicomics) or George Saunders’ Lincoln in the Bardo.

The trilogy begins in a German inn, just after World War II. Marie Sophie, a maid, looks after an invalid, a Jewish refugee who had been interned at a concentration camp. After a gentle but troubling prelude, they produce a child formed from clay. He is Jósef Loewe, the narrator of their stories, from its nascence all the way to its conclusion in the present day, when we find Jósef the aging and mildly delusional CEO of a biotech company.


Over the course of the three sections, Sjón introduces a vast array of characters, including a curious little chickadee, a jealous lover, a stamp-collector, the Archangel Gabriel at his most vulnerable, and a genderless android. He deftly employs a close third-person perspective, allowing him to delve deep into the minds and lives of his characters. From time to time, the narrative will halt its ongoing plot to elucidate an incident from a character’s past, or a folk tale that is analogous to the one being composed.

One example arrives in Thine Eyes Did See my Substance, when the story is suspended so as to tell the tale of “The Old Woman and the Kaiser,” in which a young woman in a woodland cottage takes in a hunter later revealed to be the King. Of course, they fall in love, and legend has it she bore his only true heir but raised him in the woods, keeping him from assuming the throne. The book weaves similar stories throughout, adding even more complexity to an already complex plot.

It is difficult not to equate the narrator with the author. Both Jósef Loewe and Sjón were born on the same day in Reykjavik in 1962, and Loewe often discusses the act of storytelling. In this way, the trilogy proves of and about storytelling. Sjón hails from a rich background of traditional Icelandic stories, but he is not derivative –– he is wildly original in his reshaping and expansion of these stories.

Near the end of the novel he writes:

Storytellers are not content merely to have power over their audience’s minds but must also take control over their bodies at the very beginning of their tale by lowering their voices and leaning back, thus compelling their listeners to lean forwards—after all, they’ve come to hear what the story teller has to say. By means of this synchronized shift they establish who is the guide and who the travellers are on the coming journey.

CoDex 1962 makes the reader feel as though they are engaging with a master storyteller. By the end of the trilogy, one enters into a symbiotic relationship with its narrator (and its author)—we trust Sjón will provide fulfillment in synthesizing the countless elements of the story, and we will be rewarded for following along with his vertiginous adventure. Sjón compels us to lean in close to hear his tale—and the journey is more than worthwhile.