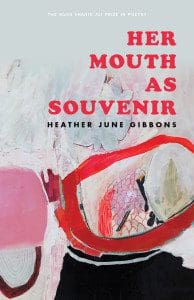 Her Mouth as Souvenir (88 pages; University of Utah Press), winner of the 2017 Agha Shahid Ali Prize in Poetry, is a breathtaking and lyrical debut collection from Heather June Gibbons. Gibbons’ voice is a strong one, as she leads the reader through well-crafted and captivatingly honest free verse.

Pressingly urgent and timely, Her Mouth as Souvenir is a study of action in the face of anxiety. The poems’ context includes larger societal trends, such as the technologizing world that presents “a strange kind of convenience, / to access at the tap of a fingertip / so much information without / the ability to understand it,” and more personal attempts to uncover the how and why of past events.

There are three sections in the book that serve to mark the passage of time. The first section is a recognition of the past, of the prophets and ancestors that walked before Gibbons and “whisper, you owe us.” It also serves as an explication of the frustration that runs through the work, frustration without a culprit.


The second section is an attempt at self-understanding, through memory and causality. (The speaker can “pinpoint the exact moment / I become boring, but only in retrospect.”) A number of the poems here are titled “Sore Song” (drawn from Gibbons’s chapbook of the same name), and a musical thread runs through many of them. References are made to musical terminology and the free verse—sonically descriptive and rhythmically careful—often has a musical quality of its own. In the onomatopoetic “Longest Song,” repetitions of shh and mutter-mutter lay beside lyrical descriptions of sound:

All sounds, even the boom of San Francisco’s Golden Gate foghorn, are treated as music.

The third and final section turns to elegy as Gibbons considers loss. There are requiems for the sudden deaths of acquaintances (“Knife Girl”), the state of society under capitalism, and even for a past self. The poems here are often longer and denser, with more narrative complexity. As the past is mourned, the poems also look toward a bleak and perhaps dystopian future. In “The Green Rose Up,” the issue of climate change is tackled, as the poem sets the scene of cities overtaken by algae and natural devastation, its inhabitants ignored by the institutions meant to protect them.

It didn’t matter that we wore our silver suits.
Cities welled up and were overwhelmed.
The green kept rising until we waded in algae
and at night a phosphorescent bloom
lit the pathways our limbs had traveled
and pocked the surface of the water with sparks.

There is a helplessness to the poem, of secretly wishing for “impossible futures,” but also longing to forget such desires in the face of their impossibility. Living in the moment is nothing more than wanting to live without the fear of what’s to come. The poem serves as a warning, showing us a glimpse of a possible future we are all but resigned to.

Throughout Her Mouth as Souvenir, perception and the failure thereof are explored. The idea that perception equals perfect reality is scoffed at. There is a constant awareness of parallax; one of the “Sore Song” poems leans into the warping of perception:

….How I’ve missed
scanning the horizon for you, wary of parallax—

decadent, the way it screws with the curves.

The collection emphasizes the inherent deception in how we see the world: “In a quick smear before full focus, the eye / misreads what it wants to see.”

The vivid imagery Gibbons employs is central to her book as a whole, as are her poems’ intricate yet simple moments—acupuncture visits and getting carded while buying cigarettes after a yoga session. These form a larger collage, a larger commentary on the nature of regret and the passage of time, capturing the anxiety, but also the beauty, of the world we inhabit.