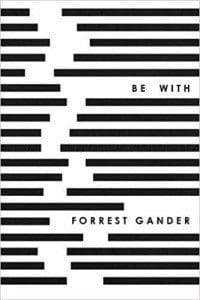 Reading Forrest Gander’s work makes the reader feel as if she’s entering a world larger than her own, one with a broader vocabulary, richer imagery, and a deeper understanding of the relationships between the ordinary and the unknowable. Sometimes one is baffled, but more often feels stretched, welcomed into a cherished complexity.

On the cover of his newest book, Be With (92 pages; New Directions), the names of the title and author in severe san serif type are pinned between black lines and the absence of lines. It’s a perfect cover for a book that explores absence and presence, loss and the lingering echoes and shadows of an entwined life. Loss may be of a loved one, of opportunity squandered, of regret for a murderous political history, of an aging and failing parent. It has as many forms as language can express, and in some poems here, one language doesn’t seem enough, and the poems slip into Spanish. Of course, the book revolves around the loss of Gander’s wife, the poet C.D. Wright, but it does so in ways that delineate the nuances of grief, both particular and universal.

The first and longest section of the book focuses on this theme, followed by a short section of poems and prose poems about the loss of the poet’s mother to dementia. The final section, “Littoral Zone,” is harder to define. There are no pat answers here, but many probing, sensitive explorations. The poet is feeling his way through difficult territory.

Despite the book’s origin in a dark period, the poems are luminous and moving, largely because of lines like these, from “Beckoned”:


At which point my grief sounds ricocheted outside of language.
Something like a drifting swarm of bees…
At which point, coming to, I knew I’d pay the whole flag-pull fare.
At which point the driver turned and said it doesn’t need to be
your fault to break you.

The mixed diction here, between the first two lines with their dramatic, pitch-perfect exposition of inchoate grief and the image of the taxi flag coming down, the cabby’s plainspoken acknowledgement, do something mysterious and uplifting, which leads to:

This journey from unspeakable pain to the shadow of a possibility of solace follows the strange logic of grief over time, and it does so with beauty, strangeness, and absolute control of the language that describes emotion that is out of control.

To read Gander’s work is to expand your knowledge of the natural world (helminth parasites, a vulture-bone flute, cockchafer, crocodile scute, lechuguilla). And because of his background in geology, the formations of the natural world appear and are named—trachyte hoodoos, Panther Laccolith, for example. These send us to search out their meaning, pushing the bounds of what we know and see and adding, as in the poem “Evaporación: A Border History,” a solidity to the surreal carnage: “Mexican corpses marooned/under desert sun…Both vaqueros/staked out naked, screaming on an ant hill.” The poem mixes Spanish and English, ending with the keening of the Spanish gerund, aullando, “howling.” It seems fitting, a gesture of solidarity with the “Depositions/of carnage.” Loss is both personal and political, our legacy of a troubled border.

In contrast, the book also has stretches of bald, no-fooling-around insights:

Addled by busyness, I crumpled my life and let it drop

“If you want
to throw in
some dirt,” the priest
addressed the widower
and his child generally
but did not
complete
the sentence.

Carrying
the rat of
affliction between
my teeth for
all to see. Just.
Try. To. Take. It.
From. Me.

The last two stanzas are from the long poem in the book, a varied series of short stanzas, two to a page for almost thirty pages, called “Tell Them No,” with an epigram from Clarice Lispector, “The essence of the thing is often in the flash.” Fittingly, these snippets are each like a moment illumined by flash. Some impressionistic, some straightforward, some more opaque, they act as a kind of litany, a mourner’s Kaddish of grief entwined with the daily work of going on living. Part of their power is the compression of language, the skillful selection and juxtaposition, the imagery. The combination creates a mesmerizing sense of moving forward through pain. It takes hold and won’t let go: “Intuition of the infinite.”

The poems that follow, in the “Ruth” section of the book, chronicle the implacable progression of aging. The mostly flat, almost reportorial passages are peppered with startling reflection: “And it won’t/get any better. Absolutely/nothing to look/forward to, she says/to whom/if not you?” Or the recognition of the blood tie, so familiar, so that looking at oneself “in the mirror I see/her face, her small/dark eyes.” The longer prose poem passages are filled with memory—the small, daily humiliations of dependency, love, and disgust— as the poet, awash in his own grief, reaches for acceptance, “akin to what a mother might feel for her child.” These moments are tender, but stripped of sentimentality, not flinching from the awkward, the unpleasant.

The final, short section of the book, “Littoral Zone,” consists of sets of three stanzas paired with black-and-white photographs by Michael Flomen, whose prints are made by placing photographic film in natural spaces over time. (You can get a better sense of them here: https://www.lensculture.com/articles/michael-flomen-michael-flomen-s-all-natural-photograms)

The first stanza is a reaction to the image, the second a series of questions about the image, and the third a remembered intimacy, now unmoored. Unfortunately, the reproductions in the book lack the drama of the originals and make it hard to immediately connect the poems to the images. Once you make that connection, the form seems obvious. Even without that connection, the reader can be buoyed by the lush imagery, relishing phrases like “My salamandrine/longing stutter-caught/on your nocturnal gorges” and “breathbeats blazed into an invisible integument.”

This is a book, like Core Samples from the World, that opens a deeper way of seeing and being in the world, inviting us to go back to it again and again. The poet is alive, although “days to come will crack open without you,/dropping their yolk over places you’ve walked.” Judging from this book, Forrest Gander is making what he can of those days and the reader is the grateful observer of this process.

2 thoughts on “The Grief of the Particular: ‘Be With’ by Forrest Gander”