Only in nature have I had experiences that could be described as spiritual. This may surprise anyone who knows of my longstanding lack of interest in camping, or, on the other hand, confidants who have witnessed the inverse of inspiration: times when I’ve been undone with distress over the plight of animals, plants, and ecosystems. Beyond all that, though, have been the private moments when, hiking or traveling, observing animals at peace in their natural habitat or taking in a vista, I’ve felt something like grace, something like awe, wash over me in a way that is both overwhelming and, somehow, steadying. In such moments, there is both a sense of stillness and unrelenting change; a sense of the breadth of life stretching in every direction (and through time), far beyond my own perception—a visceral sense of what is greater than me. And at the same time I have a more than usually concrete sense of my own being, of my feet on the actual ground, of my self as a physical creature (not just a mind endlessly busying itself). It’s as pragmatic as a sense of perspective sharply reasserting itself, and as ethereal as a daydream. There’s no accounting for such moments, and at times I’ve felt there’s no expressing them, either. And like so many phenomena on this little planet in this enormous universe, those moments have been real—whether or not anyone else can corroborate or appreciate them.

The ethos of this special issue assumes only that we can all agree on two things: first, that the environment is changing at an alarming rate (with Antarctic ice now melting at triple the rate observed ten years ago, and greenhouse gas emissions surging globally); and, second, that this is a matter of increasingly urgent concern, demanding action. Myriad questions and divergent opinions may follow from that shared ground. Some may never feel that care for the natural world is an ethical imperative, but will be mobilized by the likely devastating consequences for human beings—particularly the most vulnerable. We must make plenty of room in this movement for different views if we’re going to make progress. The hope must be to elevate the issue above partisanship just enough so we can have the necessary, generative disagreements and make the necessary compromises that may result in change, both local and global. Right now, in this country, we are stymied.

Concerns over the implications and applications of Artificial Intelligence (AI) are linked to questions about our relationship with the natural world, too, and should remind us, in case there has been some confusion, that our own minds are not computers; we, too, are animals, and irrevocably part of the natural world (not simply a force that acts upon it yet remains outside of it). Perhaps the underlying lesson is simply a cautionary tale about how difficult it is for humans to appreciate other kinds of intelligence and consciousness. Historically, we tend to perceive nonhuman intelligence as radically inferior—which says more about our powerful bias than it does about the creatures with which we share the planet. To hold ourselves separate from and somehow above our environment is a posture that frees us from the burden of worrying about catastrophe, but it is a failure of ethics and of the imagination that is destined to have dire consequences.

For this issue we sought out work that approaches the environment (and human interactions with it) from a wide variety of perspectives, but always as something more than a setting for human drama. Environment is treated here as a dynamic part of the drama, part of ethics, part of spirituality. Similarly, on the shadow side, when we think about social injustice, systemic violence, the exercise of power—the environment is ever-present, part of the drama. The environment, from parks to wilderness—and our (mis)apprehension of it all—is tangled up in every thorny moral issue, if we could only see it.


Perhaps most poignantly, in this month of very public suicides, for those who see us at or near a tipping point from which there can be no return, the environment poses this question: how do we continue, and continue to try, in the face of despair? One answer, perhaps the only answer, is that we simply must.

And there is room for hope, too. The works collected here remind us that our understanding of the environment has transformed before, and can change again. That local legislation can result in important changes with global implications, and with tangible results. That storytelling and the creative imagination have a role to play in advocacy; that such art can perhaps move the needle more effectively than argument. That we are guilty of terrible violence to ourselves and one another, but also capable, with tremendous effort, of improvement. That the end of this story is not yet written, that it is ours to decide and to tell.

In this way, this issue hopes to frame a less partisan but no less urgent approach to concerns of the environment—an approach disinterested in wearing the label “environmentalist,” and focused instead, as Obi Kaufmann proposes, on conservation and restoration. We’re hoping to do our part to lean into the creaking motion (already in gear, but working against so much lethargy when there is not a moment to spare), to make complete this paradigm shift in how we see our relationship to the environment, and to divorce ourselves from clichés of tree-huggers vs. capitalists—clichés that sneeringly diminish all of us.

Once the perspective has shifted and the picture has sharpened, the question won’t be whether to act, but how.

You can read the issue in its entirety by subscribing to ZYZZYVA or ordering a copy of Issue 113 today. 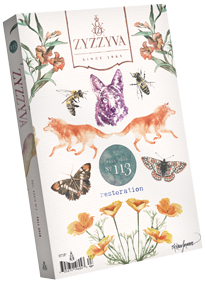 “Letter From the Editor: Fall Issue 113” by Laura Cogan was published in ZYZZYVA No. 113. Purchase the back issue in our shop.

One thought on “Letter From the Editor: Fall Issue 113”