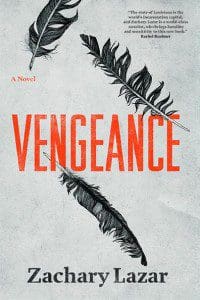 Published earlier this year to respectful notices, Zachary Lazar’s painstakingly crafted novel Vengeance (272 pages; Catapult) takes on the complicated issues of race, the socially constructed questions of guilt or innocence in late stage capitalism, cultural appropriation and redemption. “What ‘Vengeance’ really attempts to unravel is the problem of injustice, although it is not a protest novel,’’ Katy Waldman noted in The New Yorker. Prison reform has been in the air—just ask Kim Kardashian—but news cycles come and go. Regardless, Vengeance merits a more sustained look.

The novel was inspired by the author’s visit to Angola, a Louisiana State Penitentiary (and former slave plantation) where he saw a production of a Passion Play, “The Life of Jesus Christ.” With a friend named Deborah (in real-life, photographer Deborah Luster, whose series “Tooth for an Eye: A Choreography of Violence in Orleans Parish’’ is credited at the end of the book), Lazar’s narrator (and thinly veiled stand-in) attends the rehearsals and ultimate final performance.

More importantly, he befriends a prisoner named Kendrick King, doing life for his alleged role in a drug deal gone murderously wrong. Did he, in fact, do the deed? Or was he paying dues, proudly standing up for his cousin, Mason, who, the narrator finds out through dogged reporting, was most likely the one who was directly involved. But does it matter, ultimately?

King is steadfast in his self-immolation, even as the narrator does everything in his power to find out the truth: interviewing Kendrick’s family, ex-girlfriend, and daughter, and consulting police records in the course of his impossible mission.

It’s familiar territory for Lazar, who is inexorably drawn to the dark side. He previously chronicled his father’s death, in a contract killing, in the nonfiction work Evening’s Empire: The Story of My Father’s Murder. And in Sway he fictionally retold the connections among the Rolling Stones’s Brian Jones, dead in a swimming pool, the heavy waters at the ill-fated Altamont concert, and Bobby Beausoleil, an outlier of the Manson Family who was also involved with underground film chronicler Kenneth Anger.

Lazar’s prose is that of the slow blues, as in this description of a New Orleans blues joint:

“It was late, a different weeknight, but the bar was close to home, nearly empty, and we liked to go there for the music.  The singer had a voice that might have made him famous fifty years ago. He was a little paunchy now, graying, flourishing a white handkerchief he sometimes used to dab his forehead, singing a song about surviving, enduring. The drummer stayed just behind the beat so that the slow song had kick, the guitar player melting little country-and-western riffs into soul. It sounded like it was 1970 and instead of seven of us in the bar who knew some of the words it was a theater and there were many more of us. The world outside was on fire, it always was, and though the singer didn’t sing about any of that he alluded to it in the timbre of his voice. He sang about coming home to New Orleans – parochial, poor, beautiful, inescapable – and the part of the song that was celebratory was not false and the part that was sad was not weak.”

There’s more than this—much more—in this angry, meditative book, too much to do it justice here.

Lazar describes the Passion Play and Pilate’s unsuccessful remonstrance (“Behold the man. The sight of his battered and bleeding body will surely satisfy your craving for revenge’’) in measured, mounting detail. Flannery O’Connor is here, surely, as is Richard Wright.