April represents National Poetry Month, intended as a way to spread awareness and appreciation of poetry in the United States. To celebrate, each Wednesday we will be taking a deep dive into both ZYZZYVA’s recent and distant past to share some choice selections. For the final week of April, we present Jennifer Elise Foerster’s poem “Richer than Anyone in Heaven” from ZYZZYVA No. 95, Fall 2012: 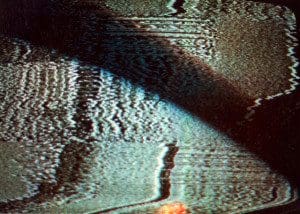 I abandoned my shoes at the corner
of Market & Pine. It was hailing.
We were holding tin pots above our heads.
Collecting the granulated wind
and singing. I don’t care
about my shoes, I said. The city was in ruins.
Pieces of fiberglass glittered in gutters
like particles of space shuttles,
of a shattered moon. We will be richer
than anyone in heaven, I said.
We stole from parlors the dying embers,
gathered the porcelain figurines.
On the fizzled trees, leaves
clanged like spoons.
Our shopping cart squeaked
down the cobblestone street.
Saw-toothed lightning slashed the sky.
Will there be music, you asked,
on the other side?
We listened through wind-vents
for echoes of earthquakes, listened for God
until the radio died. A hawk floated down
like a frayed paper crane,
snagged its claws on the electrical wire.
We crumbled the hands
from statues of saints.
Beneath the cathedrals
were underground trains
and we rode every one of them to its end.
Each station was a burned-out lantern.
I want to go home, you cried
but even the ferries bobbing on the docks
had canceled their passages.
We sat in the dark eating crusts of stale bread.
Come with me, I said.
We stumbled beneath the starless night.
We climbed the vacant streets.
From the crown of the bald,
illuminated hill, the city’s windows
dazzled. A flock of geese
scissored over smoke.
Back home, my television
blinked and snowed.


Jennifer Elise Foerster is the author of Leaving Tulsa (2013) and Bright Raft in the Afterweather (2018), both published by the University of Arizona Press. She is the recipient of a NEA Creative Writing Fellowship (2017), a Lannan Foundation Writing Residency Fellowship (2014), and was a Robert Frost Fellow in Poetry at Breadloaf (2017) and a Wallace Stegner Fellow in Poetry at Stanford (2008-2010). You can find the poem above in ZYZZYVA No. 95, available for purchase in our store.