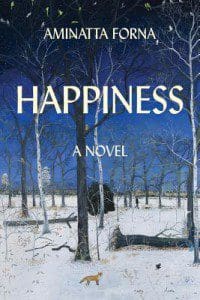 In Happiness (368 pages; Atlantic Monthly Press), novelist and memoirist Aminatta Forna takes the reader into a caravan of events that starts in contemporary London, where Attila, a Ghanian psychologist whose field study specializes in war refugees, in between “going to see plays and eating in fine restaurants,” feels as if he’s living on “a stage set, whose denizens enacted their lives against its magnificent backdrop. A theatre of delights, where nothing surely could go wrong, and if it did, all would be put right by the end of the third act.” On Waterloo Bridge one day, he bumps into Jean, an urban wildlife biologist from the United States. He has come to London to find Tano, the son of his beloved “niece,” Ama, who has been swept up recently in an immigration raid. Tano has been missing ever since.

Intertwining psychological, historical, and scientific insights, and seamlessly incorporating vignettes set in Iraq, Bosnia, and New England, Happiness explores the unexpected parallels between urban wildlife and the humans living next them:

“But he’s going to stay close by and not just because of his mother,” Jean tells Attila. “These”—”and she indicated markings on the map—“are all fox territories. Foxes stake out an area and then they stay in it. Why? Because that’s how they sustain themselves. They know where to hunt, where to find food, water, shelter, where they feel safe from predators. The boy is no different, he’s going to stay where he feels most secure.”


Amid the search for Tano, Jean finds herself being tested in other ways. During a spirited radio-show debate on the culling of foxes, Jean calls the mayor of London a fool and finds herself on the wrong end of a hashtag attack on Twitter, where she’s criticized for supporting foxes over people. Her family life isn’t going so well, either. Her son treats her like “the kind of old school friend you’ve outgrown, but to whom you remain bound by a shared history and a sense of loyalty.”

While the story largely centers on the search for Tano and the relationship between Attila and Jean that ensues from that, Happiness also considers how indispensible people such as security guards and doormen typically remain in the background of city life. The doorman at Attila’s building, for example, along with his network of surrounding doormen, security guards, and street-sweepers, stay on the alert for Tano. As such, it is the overlooked who catalyze the seemingly Sisyphean search for the lost boy. Over the search’s span of two weeks, the narrative mines the tender feelings, as well as the tensions, between Attila and Jean.. Their emotions are portrayed in such a way that it rouses sentiment rather than sentimentality:

“Love is a gamble, the stake is the human heart. The lover holds his or her cards close, lays them out one at a time and watches each move of the other player. To whom do you go first? This is the ‘tell’ of love…More than anybody else Jean wanted Attila.”

Happiness takes quotidian societal problems like racism, illegal hunting, and faulty government and wreathes them with personal issues such as mourning the deaths of wives and past lovers, Aminatta Forna has given us a pertinent novel, one whose prose is fluid and dynamic.