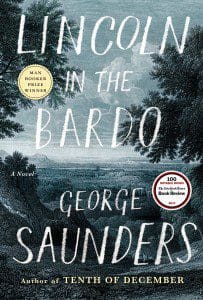 George Saunders’s Lincoln in the Bardo (350 pages; Penguin Random House), recently released in paperback, continues to offer the salve we need. This exceptional novel, which went on to win the Man Booker Prize—making Saunders the second American (in a row at that) to win the prize—has the kind of sensibility necessary for national healing; as The Atlantic noted, “In a year in which writers and artists have wrestled with the question of how to tackle the increasing prominence of hate in the political sphere, the Man Booker judges seemed to respond to Saunders’s humanizing portrait of a leader felled by grief.”

As always, Saunders’ work celebrates humanity where you least expect to find it. In his story collection Tenth of December he cheerfully examined the dark emotions driving middle-class Americans. And in Lincoln in the Bardo, which takes place during the first year of the Civil War and centers on the death of Abraham Lincoln’s eleven-year-old son, Willie, Saunders works tirelessly to understand the book’s multiple characters. Most of them are ghosts stuck in a graveyard, who are present on the night of Willie’s arrival in the cemetery. Throughout the novel, Saunders inserts excerpts from letters, newspapers, and some fictional archives that discuss the Lincoln family’s tragedy from afar. Each archival extract and fictional voice is broken up into small paragraphs, marked underneath by the speaker’s name, making the text read as a play.


“I didn’t just do it to be fancy,” Saunders told the New York Times after winning the Man Booker, “but because there was this emotional core I could feel, and that form was the only way I could get to it.” The archival excerpts also serve to break up the main narration, which is comprised of voices from the Bardo—a Tibetan space that exists between death and rebirth, where one’s fate is still undecided, similar to purgatory (although Saunders has argued that purgatory wasn’t quite right for the story; he imagined purgatory as too similar to waiting in line at DMV). The Bardo is populated by people whose bodies have died, but whose spirits are still tied to the living world. These lost souls find themselves unwilling to move on to the next world.

The souls residing in Willie’s cemetery occupy a place of denial; each one has a final memory that prevents them from accepting the truth of their own demise. They refer to their corpses as “sick-forms” and their coffins as “sick-boxes,” indicating they still think they’ll one day return to the world of the living and their loved ones. Each night, they wander the grounds of the graveyard, repeating the very same stories that keep them stuck in this liminal space. The ghosts in the Bardo can enter one another’s body, helping them access someone else’s memories, desires, and anxieties. In a discussion at San Francisco City Art and Lectures on the occasion of Lincoln in the Bardo’s paperback release, Saunders said that fiction has a similar kind of power: it has the ability to help us better understand the experiences and emotions of others, because it allows us to step into the position of someone whose experiences are far from our own. Saunders work provides a manual of sorts for national healing; it is through the practice of imagining oneself in the place of another that one can view others with compassion and ultimately move beyond differences.

One thought on “A Salve for Our Grief: ‘Lincoln in the Bardo’ by George Saunders”