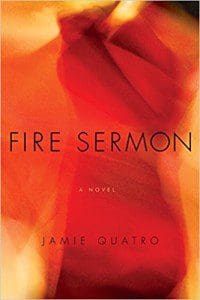 T.S. Eliot once stated, “The last thing I would wish for would be the existence of two literatures, one for Christian consumption and the other for the pagan world,” a status quo which has more or less come to pass. (It seems as though one could count on both hands the number of mainstream contemporary novels that grapple with the Christian faith.) As such, Jamie Quatro’s first novel, Fire Sermon (208 pages; Grove Press), which references the above T.S. Eliot quote, often registers as something different and exciting. Here is a smart novel for adults that deals honestly with the difficulty of nurturing faith in the midst of a world that frequently resists our attempts to prescribe it meaning—a world full of complications such as infidelity, despair, and disease that undermine the tidy proverbs of a Sunday morning sermon.

On the surface, Fire Sermon’s narrator, Maggie, possesses the ideal life: a long-running marriage to her college sweetheart, Thomas, who provides her the room to cultivate her faith in God, even if he doesn’t share it; two beautiful children; and a cozy home with a dog and a yard in Nashville. Yet as the book opens, Maggie finds herself at something of an impasse. The stresses and strains of child rearing have left her feeling displaced in her own body and therefore disinterested in sex with her husband, while his lack of understanding in her beliefs continues to increase the emotional distance between them. This martial strife creates an opening for Maggie to begin a written correspondence with an acclaimed poet named James.

Through a series of intimate e-mails and handwritten letters, many of which appear throughout Fire Sermon, the two of them form an intellectual connection that soon grows into an undeniable attraction. After meeting at several lectures and conferences, Maggie and the poet (himself married with two children) finally consummate their relationship during a stay in downtown Chicago. This night sends Maggie spiraling into an existential crisis, as she wonders how God could condemn an act she views as an expression of true feeling between two people, married to other people though they may be; and she struggles to rectify the momentousness of her beliefs with the constant torment she experiences from attempting to live up to them:


“What if you woke up one day to discover the corpse of Christ had been identified definitively? Or that an irrefutable, airtight scientific study had been devised to disprove the existence of God, and the study had—beyond any conceivable doubt—proved he did not exist? What would you feel?

Maggie’s interior life serves as the focus of much of the novel as she probes her convictions, revealing they may not be as ironclad as she would prefer to think. Her thoughts are laid bare through sessions with an unnamed Counselor (who may or may not be an imagined stand-in for God), as well as in letters –– largely unsent –– to James. Refreshingly, these interrogations of the self don’t shy away from tackling the contradictions of religion head-on; rather than reflect the shiny, copacetic surface of so-called megachurches (“Her parents’ church is an embarrassment to both of them: drums and electric guitars, flashing laser lights and images projected onto screens during the sermon…”), Maggie’s musings reaffirm the Kierkegaardian notion that maintaining one’s faith should be excruciating work. (“Job is bullshit,” Maggie declares, “Job lost everything”). In a journal entry, Maggie sums up these struggles to hold onto meaning by writing, “God of God, Light of Light, Very Void of Very Void,” a line that recalls Hemingway’s famous passage, “Our nada who art in nada, nada be thy name.”

This mention of the Void also precipitates Maggie’s philosophical ruminations on the similarities and differences between Christianity and Buddhism. In contrast to an eternity spent worshipping God with loved ones, the Buddhist afterlife proposes the annihilation of both suffering and the self –– an attractive proposition to a woman torn by her heart’s conflicting desires: “One ends in Nirvana, nonbeing…Extraction from the talons. What relief there would be in no longer to feel, again, your whiskers on my inner thigh.”

One could perhaps criticize Maggie for her somewhat solipsistic view of the world, but her character is discerning enough to call herself out and at least entertain the possibility that what she feels for her distant poet is not love, but merely the inevitable result of martial doldrums; that after years of monogamy, what she finds herself yearning for is not this man James but the idea of someone new. She pointedly asks herself if James is simply the next in “a litany of men I draw toward myself not out of loneliness or unhappiness, but out of one desire, to be fucked by someone besides my husband,” and comes to the conclusion that “…unless something is forbidden, I cannot want it with any intensity.”

These are provocative questions, and questions without easy answers, certainly not answers that could be doled out by a laser lightshow and projector screen on a Sunday morning. Their complexity rings true to the difficulties of maintaining any relationship over the span of a lifetime. To that end, Fire Sermon deserves to find an audience beyond only those who will see Maggie’s faith as a reflection of their own.

One thought on “Faith in the Void: ‘Fire Sermon’ by Jamie Quatro”