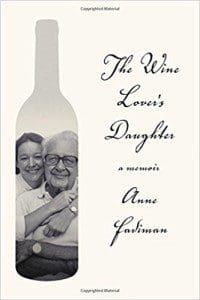 In The Wine Lover’s Daughter: A Memoir (272 pages; FSG), Anne Fadiman, the author of Ex Libris, At Large and Small: Familiar Essays, and, most notably, her prize winning work of nonfiction, The Spirit Catches You and You Fall Down, writes about her famous father, Clifton, or Kip, Fadiman. She centers her memoir, her first book in ten years, around her father’s love of wine, a love affair that begins on his first trip to Paris with an inexpensive bottle of white Graves.

Although Kip Fadiman’s love of wine was sincere—he found pleasure in the taste and complexities of wine, as well as an appreciation for its ability to enhance conversation—his daughter reveals that his interest was also tied to a desire to be as far removed as possible from his Jewish immigrant background. A self-described “meatball,” Kip Fadiman was born in 1904 to lower-middle class Eastern European immigrants in Brooklyn. Embarrassed by his parents and pedigree, he took great strides to “de-meatball” himself by reading through the Western canon, learning to speak impeccable English from his older brother (which later helped with his career as a radio host), putting himself through Columbia University, and, eventually, by becoming a leading wine connoisseur. Although he saw enormous success as a radio host for NBC’s Information Please, was editor-in-chief of Simon & Schuster before the age of 30, worked as a book critic for The New Yorker for ten years, and co-wrote the unofficial Bible of wine, The Joy of Wine, he always feared he would someday be exposed as a fraud or counterfeit.


Since he never got over feeling like an intruder to WASP culture, he worked to scrub himself of any Jewish identity, Fadiman writes, and was confounded to find later generations attempting to reclaim their Jewish roots. As she points out, wine fit in perfectly with his lifelong career of divorcing himself of his lineage – wine was civilized, civilizing, and decisively not Jewish. While her father’s embarrassment over his Jewish identity is at times troubling for a contemporary reader and for Fadiman herself, she reminds us, “I don’t have a clue what they were up against and never will.” Instead of attributing his attitude to denial and snobbery, she ascribes it to the culture that her father grew up in. This is the same culture that shaped his alma mater’s decision to pass on hiring him as a professor, claiming they had already reached their quota for Jewish professors in the department (which was at one)—a moment that made him perceive his incredibly successful professional life as a failure.

Fadiman’s writing remains polished, humorous, and approachable in The Wine Lover’s Daughter. Her love of language always shines through—in Ex Libris she discusses the Fadiman family’s joy for polysyllabic words and her father’s children’s book about a worm with an appetite for words like “zymurgy”—but her work never indulges itself to the point of requiring its readers to keep a dictionary at hand. The magnificence of her work is in her empathy for her subjects and her unwavering rationality. She never acquiesces to a reader’s impulse for her to judge her subjects or make a definitive statement that would ultimately prove reductive.

After years of trying to enjoy wine, the author finally confronts the fact that she will never love wine the way her father did. When she reaches this conclusion, she goes on a trek to find some biological reason for her distaste. At first, this chapter seems like a distraction, one that detracts from the otherwise magnificent account of the father and his relationship with his daughter. Yet, by the end, one is reminded of Fadiman’s skill as a writer. What made her book The Spirit Catches You and You Fall Down such a great success was her refusal to succumb to easy answers. She wrote with empathy for both the Western doctors and the Hmong families as they struggled over the (eventually) failed medical treatment of a young Lao girl in Merced, California. Here, she again refuses to see the world in simple terms. The answer is not found in her and her father’s different biological reactions to wine, but in their rich, yet dissimilar histories. She recognizes that her father’s love of wine could not be separated from the romance of his first experience with the white Graves and his longing to reinvent himself.

One thought on “Truth in a Glass: ‘The Wine Lover’s Daughter’ by Anne Fadiman”