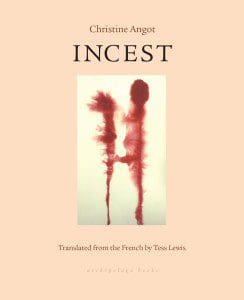 When I started reading Christine Angot’s Incest (207 pages; Archipelago Books), I wondered whether its erratic style was simply the result of how the French language, translated closely, sounds in English. But I soon discovered that it’s not just the translation: French and English-speaking readers alike have found Angot’s book untidy and difficult to decipher. From an artistic point of view, I must commend the translator, Tess Lewis, for resisting the urge to force Angot’s narrative into coherent and clear prose. Rather, her English translation of Incest strives to replicate the same frazzled reading experience as the original French.

Incest is a book that blurs the lines between a novel and stylized nonfiction. The story explores the life of a young woman (who, in a meta touch, shares the author’s name) reeling from a turbulent lesbian love affair as she begins to navigate the emotional trauma of her past, in particular the sexual abuse she suffered at the hands of her father. The narrator herself is aware of the fractured nature in which she relays her experience. She chides herself, partway through, for remaining so obscure:

I punctuate my sentences in an unusual way, I’m going to try to stop. I will use punctuation only for clarity, so that readers can find their way. The clarity of my statements. So that my statements are clear, and understood. A bit fastidious, maybe, but this time properly. I won’t write, anymore, for example, “I licked her, this woman, whose child is a dog,” I won’t write that anymore, what’s the point?

At times the narrator attempts to be more logical, but inevitably slips back into her circular, obsessive mutterings. It is shocking, then, to be faced with the visceral nature of her memories. Angot’s testimony of her abusive teenage years proves both vivid and immersive. You can tell that the narrator, by describing her experiences, is being forced to relive them as well. The book struggles to make sense of anything else in the narrator’s life as it dances around the very real pain of her past.


Some critics hailed Incest as a fresh, brutally honest recounting of a traumatic experience. And yet others stated they couldn’t make it more than 40 pages through its convoluted and frequently repetitive narrative. There are even those who have dismissed the book as sensationalistic navel-gazing attempting to ride its taboo content to popularity. A 2013 Telegraph article labelled Angot as “France’s Queen of Shock-Fiction.”

Angot calls these associations “incestuous ideas,” and believes that the incest eliminated her mind’s ability to recognize partitions between concepts:

I reached a point of no return, the word associations were threatening, incestuous ideas were filling my head…There is no partition, everything touches, nothing is untouchable…I’m not making this up. The brain cannot be divided into separate parts. It’s not that I’m missing something upstairs, as the saying goes, it’s a house without walls…

She’s right. You can’t make stuff like this up. Now it will be for English readers to decide whether navigating Incest’s murkiest passages and disturbing subject matter is worth the price to experience Angot’s searing vision.