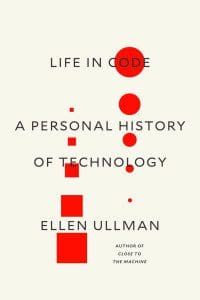 Essays about the perils of the Internet are common, as are the many books hawking cynicism about the “Information Age,” the “iGeneration,” or start-up culture. But Ellen Ullman’s Life in Code: A Personal History of Technology (303 pages; MCD/FSG), stands above the pseudo–science crowd; she draws us into the world of computer programming from the inside, showing us what she’s learned since the beginning of the Internet. The memoir, comprised of some of Ullman’s previous essays as well as several new ones, is arranged somewhat chronologically (from 1992 to January 2017) and thematically as Ullman describes what her title suggests: a lifetime spent in code.

Her perspective is hard-won and enduringly timely. Everything in the book, from her account from decades past of being the only woman on teams of male computer engineers to discussions then of AI advances, could have been published in the Atlantic during the last month. This underscores how little tech culture has changed since Ullman began programming in 1978. However, one would be wrong to assume Life in Code is a stuffy play-by-play of Javascript bugs, Microsoft takeovers, and Silicon Valley unicorn start-ups—though each does have their role. In an irony that is not at all lost on Ullman, it becomes clearer with every page her book is about people—their missed connections, flaws, and rare triumphs—more so than the technologies those very people seem to prefer inhabiting over their own lives.


Ullman’s book upends our expectations. Her writing seamlessly merges with her subject matter, shifting from scientific investigation and programming primer to philosophical inquiry and journalistic account—and circling back again. And because she cannot account for things she did not see, hear, or discuss with someone, the book is welcomingly personal like a diary. But it is a history as well. A longtime San Franciscan, she records the city’s meteoric rise with a sense of horror as Silicon Valley eats it alive. And she recounts the various concerns presented by evolving computer engineering as they happened at the time. (For anybody too young to remember, her account of the Y2K bug provides not only a newspaper-like synopsis of why it was such a concern, but presents us with the real people who were, and weren’t, worried about catastrophe at the time.) With all this comes the hope of presenting a grander truth that supersedes the merely anecdotal. In this, Ullman succeeds.

The stories she weaves throughout are not only interesting in themselves, but offer endless insights, as Ullman bends language to make her point. (I doubt there has ever been a better description of a co-working space in San Francisco than as a “warren” of start-ups.) Given her memoir is centered on the Internet and on programming, there’s a bit of unavoidable nomenclature and jargon to hurdle. But Ullman guides the average person through the vocabulary of this willfully closeted arena with grace and finesse. In doing so, she also forces us to acknowledge how little we know about the technologies we’ve allowed to shape our lives.

Above all, what is so marvelous about the book is its intimate tone. Whether Ullman seems worried, resolute, optimistic, or in doubt, the reader always has the impression of sitting down to coffee in her living room as she tells a story. She cares about her reader, and wants to offer us an important look into the techies’ ivory tower, to see what the world looks like from the Googleplex. To the final page, Life in Code depicts its world of sushiritos and nap corners as a perfectly wound dark comedy. There’s a transfixing, laughable absurdity to it all–but there’s always a disconcerting reality lurking not far behind, one that blinks and blinks like a green power light, always on.