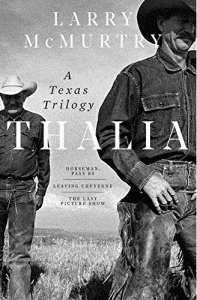 I once talked to Larry McMurtry on the telephone.

I was doing a piece for the Los Angeles Herald Examiner, pegged to Terms of Endearment, on why his works were so compulsively suitable for adaptation to the big (and little) screen – this was after Hud and The Last Picture Show, but before Lonesome Dove or Brokeback Mountain.

I was getting nowhere trying to reach him, until a friend tipped me off that he was staying at the Beverly Wilshire with his son, on a stopover before a skiing trip.

When I got connected to McMurtry’s room, and explained what I was up to, he was a little surprised, and polite enough – but direct. “I don’t do interviews,” he said. “I just don’t see the point.”

It’s that kind of understated honesty that, after decamping from the desolate Archer City ranch he was brought up in, helped him survive the wilds of the Stanford writing program, where, as a Stegner Fellow, he hung out with Ken Kesey and other latter-day Merry Pranksters, but kept his hands on the wheel, like fellow classmate Robert Stone.

At 81, and approaching the end of a distinguished literary career, amid (apparently premature) rumors of retirement, his early work is being celebrated with A Texas Trilogy (722 pages; Liveright), the re-issue of his first three novels, Horseman, Pass By; Leaving Cheyenne; and The Last Picture Show.

In a fresh introduction to the new volume, McMurtry humble brags Horseman, Pass By – the title came from Yeats, but was discarded by the filmmakers for the simpler sobriquet Hud – but allows it some credit for “occasionally pleasing lyricism.’’

Well, more than that.

New Yorker film critic Pauline Kael famously dissed the movie (and the book) for its sanctimonious portrayal of Homer Bannon, the cattleman who unhappily agrees to let government regulators inspect his herd for mad cow disease – and allows them to be slaughtered once it is confirmed. As usual, Kael far preferred the antihero, Hud (as the movie billboard campaign memorably put it, Paul Newman is Hud), for his virility and lack of pretension, in comparison to Homer or Hud’s younger, more sensitive and idealistic half-brother, Lonnie.


But her real critique seemed to boil down to a less subtle form of social snobbery: at the end of the day, these people were…hicks.

It’s the kind of assault being leveled these days on “Trump country” – even as pictures flooded the news recently of burly boaters rescuing older hurricane refugees, many of them African-American, from roofs and car tops. This is not to discount the myriad ways in which our current President is awful – a gargoylish caricature of our worst collective prejudices – but an acknowledgement that there is a deeper reality than what we see on screens (let alone tweets). To be rooted in the country is advantageous, as well as alarming.

Towards the end of Horseman, Lonnie articulates some of this as he tries to escape his troubles at a dance after a rodeo in which a friend was crushed by a bull:

The band was playing one of those songs of Hank Williams’, the one about the wild side of life, and the music floated over the car tops and touched me…Only the tune of the song reached me, but the tune was enough. It fit the night and the country and the way I was feeling, and fit them better than anything I knew. What few stories the dancing people had to tell were already told in the worn-out words of songs like that one, and their kind of living, the few things they knew and lived to a fare-thee-well in the sad high tune. City people probably wouldn’t believe there were folks simple enough to live their lives out in sentiments like those – but they didn’t know.

It is a complex fate being an American, indeed.

“This was the small-town West I and so many of my friends came out of – escaping from the swaggering small-town hotshots like Hud,’’ writes Kael, who was born in Petaluma. “But I didn’t remember any boys like Brandon DeWilde’s Lon: he wasn’t born in the West or in anyone’s imagination; that seventeen-year-old blank sheet of paper has been handed down from generations of lazy hack writers.’’

Although McMurtry admitted, with typical modesty, that the polarities between Homer and no-good Hud were overdrawn, clearly there must have been some sensitive souls on the range – how else to account for McMurtry’s own prodigious output, and his famously good ear for women characters? Maybe Kael was just looking for love in all the wrong places, as the song would have it.

Trust the tale, not the teller.

Even as a first effort, Horseman, Pass By, published in 1961 when the author was all of 25, stands up to re-reading. There’s a touch of Twain in Lon’s lonesome laments, and of Dreiser (and Tom Buchanan) in the depiction of Hud’s rough romancing.

McMurtry, who clearly knows his way around a High Concept pitch, describes his second novel, Leaving Cheyenne, as “the bittersweet story of a longtime love triangle among a rancher, his cowboy, and an appealing countrywoman who loves them both.’’

It was adapted into a ludicrous film, Lovin’ Molly, starring the amazingly miscast Anthony Perkins as one of the ranch hands and Beau Bridges, doing as best possible under the circumstances, as Johnny McCloud, his sidekick and romantic rival. But the book’s real achievement is McMurtry’s portrait of Molly. Part of his unending curiosity into the mysteries and unreachability of women in general, and the woman his protagonist is obsessed with in particular, it prefigured the development of more mature characters like Patsy Carpenter in Moving On, Emma Greenway-Horton and her mom, Aurora, in Terms of Endearment, and Jill Peel in Somebody’s Darling.

Molly Taylor, the liberated lady of the prairies, has her overly serious suitor, Gideon Fry’s number about the difference between wanting to be in in love, and the actual experience. As she tells him, “You’re always thinking about Johnny or Eddie or your ranch or your dad or what people will think, or what’s right and wrong, something like that…. Or else you just like to think about having me for a girl. That ain’t loving nobody much. I can tell you that.” Busted.

Huck Finn’s ghost pops up as Gid comes to grips with the fact, that, unlike Johnny, he can’t just walk away from his roots.

I didn’t mind the company; I didn’t mind the country, or even the cold weather,’’ McMurtry writes, of an interlude in which McCloud has talked Fry into taking off into the wilds. “I just minded feeling like I wasn’t where I belonged…I couldn’t get over thinking about Dad and Molly and the country and the ranch, the things I knew. The things that were mine. It wasn’t that I liked being in Archer Country so much – sometimes I hated it. But I was just tied up with it; whatever happened there was happening to me, even if I wasn’t there to see it. The country might not be very nice and the people might be ornery; but it was my country and my people, and no other country was; no other people, either. You do better staying with your own, even if it’s hard.

Hard times are what define the fictional terrain of The Last Picture Show (1966), the coda of the “new” collection and the most formally accomplished of the trio. As in Peter Bogdanovich’s film adaptation, the sharp-eyed characterizations of small town football buddies Sonny Crawford and Duane Jackson, the town tease Lacy Farrow, her mutinously adulterous mom Lois, and Sam the Lion, the local pool hall proprietor, are precisely etched, as is the subplot involving Sonny’s callous affair with Ruth Popper, the wife of the (closeted) high school football coach.

As the saga draws to an end, the Thalia picture show closes, with a whimper, not a bang – showing an Audie Murphy vehicle called The Kid From Texas in lieu of a John Ford classic. It’s second-rate, but the novel is not.

“While writing these three novels, it was clear to me that I was witnessing the dying of a way of life, too – the rural, pastoral way of life,” McMurtry writes. “And in many of the books that I’ve produced, it has taken thousands of words to attend to the passing of the cowboy as well: the myth of my country, and of my people, too.”

This was country he would not return to until the publication, thousands of words later, of Lonesome Dove. Intended as an anti-Western, it of course had the opposite effect, bringing the author his first Pulitzer and a massive audience for the mini-series that was based on it.

The irony was not lost on McMurtry, a writer so keenly aware of regional marginalization that he used to wear a sweatshirt with the logo: “Minor regional novelist.’’ (His bemused account, in Literary Life, of his tenure as president of PEN America, and failed attempts to broaden its scope beyond Manhattan, is instructive.)

His portraits of contemporary life have been no less telling. The next re-release of his work, one hopes, will be the “Houston trilogy’’ – Moving On, All My Friends Are Going To Be Strangers, and Terms of Endearment – which deal with clearly autobiographical material, especially in Strangers, the tale of Danny Deck, a young Texas novelist whose success brings unexpected, and unwelcome, consequences. And Somebody’s Darling, a picaresque tale of the adventures of rising director Jill Peel, sardonic screenwriter Joe Percy, and Owen Oarson, a Texas stud along for the unlikely ride, is as good a Hollywood novel as I’ve read.

McMurtry is always accessible and humane as the latest trilogy reminds us. Although a former Stegner Fellow, his voice is never as portentous as that of the late Western writer, and less apocalyptic than his classmate Kesey.

“What really knocks me out is a book that, when you’re all done reading it, you wish the author that wrote it was a terrific friend of yours, and you could call him up on the phone whenever you felt like it,’’ J.D. Salinger famously wrote (and lived to regret).

But I don’t mind that my talk with Larry McMurtry was so brief. It left him more time to keep writing. The conversation continued.

2 thoughts on “Last Man in the West: ‘A Texas Trilogy’ by Larry McMurtry”