Ann Beattie’s career began, auspiciously, 40 years ago with the joint publication of her first novel, Chilly Scenes of Winter, and Distortions, a short story collection. It was an almost unheard of debut for a writer whose career had previously consisted 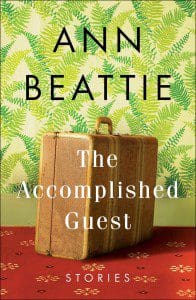 largely of short stories in The New Yorker and a few other publications.

But she immediately captured critical attention with her pitch-perfect depiction of the lives of her contemporaries, shellshocked by political changes, struggling with the problems of dysfunctional relationships and trying to find a way to make sense of the senseless.

It didn’t hurt that she was also hip, strewing pop and drug culture references through her work like bread crumbs leading to an imaginary cottage. The startling directness and present-tense presence of her voice did not escape the attention of her peers, either.

“You figured out how to write an entirely different kind of story,’’ John Updike told her, at their first meeting.

Although Beattie’s formidable formal innovations are remarkable, it’s no disservice to her work, which now encompasses 19 books, to say she is working in the same arena as such contemporaries as Alice Munro, and predecessors from Mavis Gallant to Chekhov, or Maupassant.

She may not be squarely in their fictional lane – her style is uniquely her own – but they populate the same neighborhood of experience, and no doubt would find a way to successfully communicate over the garden fence. There has recently been an outpouring of work from Beattie, including the publication last year of The State We’re In: Maine Stories. (She and her husband, the painter Lincoln Perry, divide their time between Maine and Key West). Her newest, just-released collection, The Accomplished Guest (288 pages; Scribner), is stunningly successful – reading it is like being hit by successive waves of emotion recalled – not so much in tranquility as in the vertiginous heat of a summer afternoon. The title pays homage to Emily Dickinson’s poem, which she chooses as an epigraph:

The soul should always stand ajar

That if the heaven inquire,

He will not be obliged to wait,


Or shy of troubling her.

Depart, before the host has slid

The bolt upon the door,

To seek for the accomplished guest, –

Her visitor no more.

The “accomplished guest’’ referred to here, of course, is a blood relative of Henry James’ “Distinguished Gentleman.’’ Many of the stories in the new collection deal with the death, illness, loss and irrevocable pain suffered by her sometimes rowdy cast of characters. (Others recount visits – weddings, birthdays, reunions – so the sword is two-edged.)

In “The Debt,’’ two brothers, Dick and Royal, go to Fort Lauderdale to see a newly divorced friend, and demand answers from another friend who’d burned all three of them in a business deal. The plot gets progressively baroque and the Accomplished Guest pays a surprising visit, with little fanfare:

“This was three nights before Christmas, two nights before they drove south to confront John Kegan in Key West about screwing them over, two nights before Yuliana, the Moldavian girl Royal picked up after a private lap dance on Truman Avenue, got the best Christmas present she ever received, which also fit her ring finger perfectly, two nights before Kegan took off on his own and, as they’d later learn, put down one ice-cold Stoli shot after another, served by a bartender in an elf costume at a beach bar, from which he was ejected when he commented on the elf’s cleavage, after which he apparently wandered down to Dick Dock, stepped out of his Bermuda shirts, Lacoste shirt and Tevas, and dove into the Atlantic. Three Japanese tourists came upon his body at dawn.’’

As always, the reveal is understated. For all her signature references to Dylan lyrics, or country and western songs, Beattie’s timing is more like that of a jazz musician: she knows how to play between the notes, as Miles Davis put it.

In “The Cloud,’’ Candace, visits her aging Uncle Sterling in New England to check in on him and scout out locations for her upcoming wedding. They start out to a restaurant but when it’s too noisy and crowded, they head over to meet Sterling’s (much younger) new girlfriend – but not before they receive origami birds by a black guy who appreciates the fact that they asked permission to park in front of his house.

“I’ll take you to my new girlfriend’s and we can order pizza,’’ Sterling tells her. “She lives in a cliff-hanger of a so-called townhouse on the way to 64, with crappy wall-to-wall carpeting and an addict daughter, who comes and goes, who can’t even make it through beauty school. I was reaching for a plate the other night and the cabinet door came off in my hand. Particle board.’’

Even worse, Sterling’s girlfriend Lana lost the “memoir’’ she had been working on when it disappeared from her Mac:

“The one thing I know, I convinced her to keep the machine, to print the story every time she had a new part. She didn’t have a printer before. Anyway, this guy…told us that for very little money, she could have everything backed up and it could go to heaven.’’

“A service you pay for, where everything you write – “

“Automatic back-up, it goes to the cloud?’’

“That’s it! I told you, up to the sky, like a moonbeam bouncing back! Goes to the clouds.”

“Buckets of moonbeams, buckets of tears!”

She looked at him, confused. It was like having a conversation with a crazy person.

“Buckets of moonbeams, buckets of tears…blah, blah, blah, honey, when you go,’’ he sang in a good imitation of Bob Dylan.’

Summaries and snippets don’t do justice to Beattie’s work; at this point she reminds me of Fast Eddie Felson, coolly calling the shots – 6 ball, corner pocket – as she dispassionately dispenses her tales. A good ways into a long career, she’s at the top of her game.

But it’s a mistake to think of The Accomplished Guest as a departure. I’ve been re-reading Distortions and it displays the same sensibility, and skill. “Fancy Flights,’’ about Michael, who gets fired from a job at a furniture factory for smoking too much hash, could have been written yesterday. People don’t behave as they should, but as they actually do. Sample dialogue has Hemingway-like brevity, and punch.

“I was on the verge of picking up a barmaid,’’ Michael says.

“I don’t know how I could help loving you,’’ Elsa says.

There’s a way of literary grading – for “ambition’’ or choice of different subject matter – that seems particularly American, and that makes absolutely no sense. B+. A-. A+. Come off it.

But fashions come and go, and after the initial shock of recognition, Beattie’s reputation suffered a bit. Her subjects lacked the blue collar cache of her close friend Raymond Carver, and, in the brief “death of irony’’ post-9/11 era, the maximalist obsessiveness and fantastic voyages of David Foster Wallace and David Mitchell were more in vogue.

She has been critiqued for lack of affect, and the seeming passivity of her characters. But that’s confusing the dancer from the dance – she has always told her own truth, in her own way. (And by the way, despite the rap of the “bleakness’’ of her fictional world, there’s an antic humor, not very far below the surface, that’s worthy of another friend, Donald Barthelme.)

The dogs bark, and the caravan moves on. When the accomplished guest arrives, she is greeted serenely. We have been waiting.

One thought on “Door of the Soul: ‘The Accomplished Guest’ by Ann Beattie”