An umbilical cord that cannot be cut –– even after death –– turns out to be less of an impediment than one might think in Knots (176 pages; FSG), Gunnhild Øyehaug’s eccentric collection of short stories. Emotional and mental knots are as binding and problematic as physical ones in these surreal and memorable stories, translated from the Norwegian by Kari Dickson.

Øyehaug’s stories run brief as they oscillate between the bizarre and the everyday. In the opening story “Nice and Mild,” a man suffering from anxiety ventures to IKEA to buy curtains for his son, while in “Grandma is Sleeping,” a woman refuses to let in her family inside her home. And the story “The Object Takes and Exalted Place in the Discourse” reads about as theoretical as it sounds. 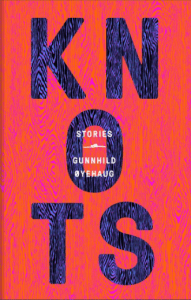 
These vignettes are windows not only into the tangled lives of Øyehaug’s characters, but the possibilities of the short story form: some feel like scenes from a play, others contain footnotes that introduce a new character’s perspective. No matter how experimental, the stories benefit from Øyehaug’s skill at creating fully realized characters. She treats these individuals with compassion, humor, and occasional severity—and they in turn ensure the stories in Knots are consistently surprising and memorable.

While most of the stories in Knots are not overtly connected, repeated elements—allusions to Rimbaud, themes of longing and compulsion, and the motif of knots— give the collection a sense of cohesion.  At times, plotlines from one story will resume later: “Take Off, Landing” follows protagonist Geir until he watches his acquaintance Asle, stone in hands, jump off a dock—a hundred pages later, the story “Air” picks up from that very moment. “Deal” follows a young runaway as she receives a ride home from a local source of scandal, a man whose story continues in “Two by Two.”

In this way, Øyehaug utilizes the short story form to reveal how some things in life will always remain out of frame and out of focus. Later, Geir’s perspective of Asle cuts away, via footnote, to a “brilliant explanation” for why Asle is carrying a stone—yet we never explicitly learn just why Geir spends his days watching others from a van.

Knots begins with a quote from poet Christophe Tarkos: “One of two things: either the spiral/Or to be sent out into the air,” and Øyehaug fittingly embraces a lack of resolution, oftentimes leaving things unsaid. At the end of several pieces, an authorial voice enters to offer glib asides or lessons. After a conflict unfolds between two aliens in “Meanwhile, on Another Planet,” a clinical voice sums up the story’s moral: “What can we learn from this? That impossible situations can arise on other planets too. We don’t need to think that we’re the only ones who struggle and fight. Another striking feature is that they communicate through pictures.”  These rare moments of authorial intrusion are unsettling precisely because the rest of the stories, no matter how surreal they may become, feel genuine and earnest. Even with the presence of floralh-patterned UFOs, the most unexpected surprise in Knots is how moving the stories prove.