I turn to the poems of Noelle Kocot for the same reason I entered corn mazes as a kid: both are pleasurably unpredictable, and both transform everyday places into thrilling twilight zones. Though Kocot’s writing has covered a great deal of formal and conceptual terrain over the course of her seven books, her work has remained whip-smart and darkly playful, consistently carrying off great feats of imagination while orbiting an urgent emotional truth. These hallmarks are present in the restless quatrains of her Levis Poetry Prize-winning first collection, in the unflinching elegies for her late husband in Sunny Wednesday, and, now, in the tersely elliptical poems of Phantom Pains of Madness, released last month from Wave Books. Like its predecessors, Kocot’s latest book fills me with a combination of triumph and incongruous grief, like a kid at the end of a corn maze.

Phantom Pains of Madness is memorable for a few reasons. First, every one of its lines comprises only a single word, so the resulting columns of text appear lean and sinewy, as if pared down from a much larger whole:

Kocot also has a way of writing about cognitive distortions that is more on the mark and profound than that of any other living poet I can think of. The poems in Phantom Pains of Madness mimic the language of the mind in its least rational, most disjunctive states, recounting hallucinatory pangs and visions in all their stinging color. We spoke with Kocot via email about her new book, the role of poetry in destigmatizing mental illness, and cool and hot jazz.

ZYZZYVA: According to the blurb, this collection explores “a break with reality that occurred a decade and a half ago.” You’ve been busy during that decade and a half, publishing six full-length books of poetry and a collection of translations, among other projects. I’m curious about whether Phantom Pains of Madness was incubating during all that time.

Noelle Kocot: Well, I didn’t plan a book; instead, I wrote about 200 of these poems. (Joshua Beckman, poet and editor at Wave Books, made the selections and the order.) It was when I quit smoking cigarettes (ultimately unsuccessfully), hence the title. I felt so crazed and out of my mind when I wrote these poems from the lack of nicotine, which lasted around four months. So yes, definitely it had been incubating for all that time, but quitting smoking was definitely the impetus, because it really was the experience of “phantom pains of madness.”

NK: I think I started it in December, 2014, and wrote most of the poems till about February of 2014. Then I started smoking again, because the madness was getting progressively worse the longer I quit. But I continued writing them until I don’t know when. This has been my most difficult book to write because of the toll it took on me.

Z: I’m interested in the distinctive one-word-per-line form of these poems; it makes for such an intense, almost mesmeric reading experience, while also demanding that the reader supply her own inflections and phrasal boundaries to every poem. I’m not sure I’ve ever come across an entire collection of poems in this form; is yours the first?

NK: Robert Lax also wrote a lot of one-word-line poems, but I’m not sure if he had one collection expressly devoted to them. I just want people to enjoy it, and thank you for your kind words.

Z: How did you arrive at this form?

NK: I just was so nicotine deprived, it happened automatically one desperate night!

Z: I’ve read that you don’t often revise your work. Was that the case for this book, given the tremendous weight these poems place on each individual word? 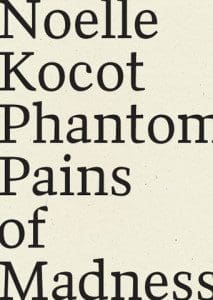 NK: No, I didn’t revise this one, either. Maybe the reason I don’t revise is because I feel like it’s so very important for me to get it right the first time, to strike while the iron is hot!

Z: Part of what intrigues me about this book is how wildly it pivots between images and tonalities while also maintaining such rigid visual uniformity. I felt in some ways unmoored by these poems, yet also comforted by the assurance of your voice and formal choices. What were you listening to or reading that perhaps infused the writing of this book?

NK: You know, I really don’t remember what I was reading or listening to. Probably some good, cool jazz, at least for the music. (I have since learned to like hot jazz, too!) I love jazz. I love Louis Armstrong, John Coltrane, Billie Holiday, Dave Brubeck (well, actually only one song by Dave Brubeck), Miles Davis, Bud Powell—you name it, I love it. And I’m very into classical music, too. Xenakis is my modern favorite, but he’s not known so much in the States—more so in Europe.

Thank you for telling me you like the voice in the poems—that is very important to me.

Z: How do you conceptualize the relationship between poetry and mental health? Does poetry facilitate healing for you?

NK: Yes, poetry does facilitate healing for me, and I really hope that my poetry will be healing to others. I hope that very much.

I very much believe that each person wants to realize herself. I hope that by writing my poetry of my own journey, I might inspire another person to look within and see what they can use. My poetry is not popular with everyone, I know that. But I have gotten a bunch of letters saying things like, “Your poetry helped me to not commit suicide,” or “Your poetry helped me through my loved one’s (or parent’s) death.” I think that just by being emotionally honest, it gives others the permission to do so, and to make a lot of mistakes. I find this culture to be soul-crushing in ways; perhaps it’s always been. I think I just want people to feel free to be themselves and to create lives that nourish them and others. Lord knows, I spend so much time struggling myself! Why not put it to some use?

Z: Do you see that as an explicitly political mission?

NK: This is an extremely political book. Destigmatizing mental illness is one of the most important civil rights issues of our time, and one of the most ignored. I think that just the fact that I’ve been through what I’ve been through and am walking around alive is testimony enough to destigmatizing mental illness. I don’t come off as crazy in person (though I do write my share of eccentric emails), am a member of a church that does a lot of outreach; I hold jobs. There used to be an ad on the subway in the early 2000s that said, “for the mentally ill, treatment is working.” It was when I first got diagnosed with manic depression and wasn’t stable yet. I used to stare at those posters of the four individuals, and I thought, someday, that’s going to be me.

Z: Is there anything exciting you’re working on currently?

NK: Oh, I just write this and that. I write hundreds of poems a year. Right now, I’m working on something, in a form, too, but not like this. I’ve got my marbles as long as I can have nicotine.

One thought on “Healing the Phantom Pains Through Poetry: Q&A with Noelle Kocot”