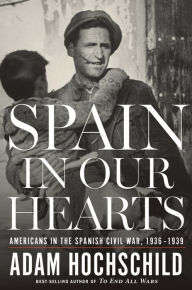 Adam Hochschild’s Spain in Our Hearts (Houghton Mifflin Harcourt, 372 pages) carries the unique distinction of possessing value equally for the specialist and the lay reader. Hochschild is not only a historian but also a humane storyteller, and in Spain in Our Hearts the literary quality of his prose alternatively sweeps the reader into the historical narrative, while also situating us in the subjective experience of his key historical personages. His and their conception of what the Spanish Civil War actually meant is attested to time and again by an array of ideologically discrepant individuals ranging from foreign correspondents and foreign fighters, including George Orwell, as well the diaries and letters of the Spanish troops on the ground. Their shared portentous sentiment—that this was the rehearsal for World War II, for the near global and yet by no means black-and-white opposition to Fascism—is eerily and independently echoed by witnesses throughout the book.

The book begins with urgency, pulling the reader into the chaos and tumult that will characterize much of the narrative: “The country is in flames. For nearly two years, the fractious but democratically elected government of the Spanish Republic has been defending itself against a military uprising led by Francisco Franco and backed by Nazi Germany and Fascist Italy.” By November 1936, the country was roughly divided between its West, where Franco had more or less triumphed in a military and government take over, and the East, where Republican, Anarchist, and Communist communities held control. What strikes one immediately is the inventive and therefore especially disturbing barbarity and ruthlessness of Franco’s regime in dealing with dissidents and oppositional forces. These atrocities were often geographically removed from Barcelona, which seemed to many to be a kind of budding egalitarian Utopia, especially to a few of the Americans Hochschild follows who arrived in the city early in the conflict.


One of these, Lois Orr, a 19-year-old American, believed that ideological power would triumph over Franco’s forces more readily than combat (despite the news of the barbarity of his tactics and his unceasing claim to take control of Spain by sheer military force) and went so far as to accuse Orwell, introducing himself discretely as Eric Blair, of seeking only self-valorization. Hochschild shows that this kind of idealism was often just naivety before the realities of the conflict and the historical importance it carried. Unfortunately, factional infighting among the Left in Barcelona would be a deciding factor in the eventual defeat of Republican forces. Recognizing the importance of direct opposition upon arrival, Orwell demanded to be sent to the front immediately, even if it meant joining a unit of the POUM with whom he disagreed ideologically. His account of the war and his place in it, Homage to Catalonia, is anything but a valorous portrait of himself or his unit, discussing their ineffective and outdated weapons, the internal chaos of the Popular Front, and even his own personal blunders in battle.

Despite every discouragement by the U.S. government (threats to revoke citizenship, the possibility of passports being confiscated), the American volunteers of the Lincoln Brigade arrived in 1937 time to participate in a series of important battles against Franco’s forces. Enduring some of the most horrendous conditions the conflict had to offer, lice-ridden and unwashed men stayed in the trenches for weeks with no word of how much longer they would be there. Because they had no military training, and because the Popular Front was ill-equipped to provide them with any, they suffered heavy casualties. Yet they suffered willingly, despite the skewed pro-Franco writing about the war being published back home in major newspapers. One volunteer, a young man named Joseph Selligman, Junior, left his parents unannounced, asking a friend to present them with a delayed letter explaining why he joined the war effort in Spain. Leaving the safety and security of his family and his country, as well as the prospect of obtaining a graduate degree in philosophy from Harvard, Seligman reveals a selfless heroism in his letter: “’I am going to Spain… I am really too excited and angry… to do anything else…. Besides, a lot of good a diploma would do in a Fascist era—and Spain seems to me to be the crucial test.’” Hochschild writes “[i]n the battle of Madrid, Selligman would be the first American to go into combat.” Tragically, he would die in that same battle.

The ending of the Spanish Civil War being what it was the book would be incapable of having what might usually be thought of as a happy, even a neutral conclusion. Yet the Lincoln Brigade comes off the page with a poignant historical insight. Authoritarian thinking of surprisingly varied types exists en masse in our present era. The soldiers of the Lincoln Battalion should serve as a reminder of the bravery necessary to stand in opposition to this tendency, as they willingly did, in its most pernicious form. They, and the other men and women who took part in this effort, exhibited a physical courage which is required in only the most severe of circumstances, which should by no means shift attention away from the potency of their equal intellectual bravery.