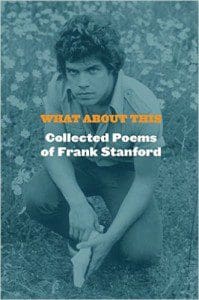 What About This, the title of the massive new edition of the Collected Poems of Frank Stanford (747 pages, Copperhead Press) announces, a cover picture of the late poet (dubbed the “swamp-rat Rimbaud’’ by Lorenzo Thomas) glaring at you.

Well, what about it?

First things first: If the romantic ideal of the poet is to live fast, love hard, and leave a good-looking corpse, Stanford did all of the above, and then some.

It’s impossible to ignore the biography. Born August 1, 1948, in Richton, Mississippi, Stanford shot himself, after reportedly being confronted about multiple infidelities by his wife, Ginny, and his girlfriend, C.D. Wright, who were both in his Fayetteville, Arkansas, house at the time—June 3, 1978, a couple of months shy of his 30th birthday.

That’s about the only thing you could say was shy about Stanford.

This is by necessity a series of thoughts, not necessarily adequate to the occasion, and certainly not a “review.’’

To give a full sense of the man and his work, I think you’d probably have to have known him. And be Southern. And have closed down some bars with him, had some ugly arguments and then made up.

“Be regular and orderly in your life so that you may be violent and original in your work,’’ the good Gustave put it. But Stanford was having none of that: it was double or nothing.


More than half in love with easeful death, he met his monsters head on, as in this section from “Death and the Arkansas River”:

…while everyone was in hipboots
Looking out for Death’s forklift,
There was a shine on Death’s loafers.
His poll tax was paid, so was his light bill.

In the winter Death runs snow tires on his truck,
He makes long hauls at night.
Death pays the best wage,
He can keep in touch on his two-way,
He’s paid all the Laws off.

Echoes of Hank Williams abound, along with gypsy shouts, the incredulous cries of French and South American Surrealists, and the long laments of field hands and country crackers.

A poem simply titled “Living” captures the climate of “good old boys like these, Hank and Tennessee,’’ as the country artist Don Williams once put it. Here is the poem in its entirety:

I had my quiet time early in the morning
Eating Almond Joys with Mother.
We’d sit on the back porch and talk to God.
We really had a good time.

Later on,
I’d sort baseball cards
Or look for bottles.
In the afternoon I’d shoot blackbirds.

Jimmy would go by the house for ice water
And make the truck backfire.
Oh, I really liked that.
That was the reason he did it.

In the evening the cottontails ran across the groves.
I shot one and put him in the backseat.
He went to the bathroom.
Jimmy said I knocked the shit out of him.

At night we would listen to the ballgame.
Then to the Hoss Man.
Jimmy liked “Take Out Some Insurance On Me Baby” by Jimmy Reed.

William Carlos Williams is here, but he’s moved off the porches of Paterson. So is Whitman, and maybe Vachel Lindsay and a host of other angels.

And Ezra Pound, too, in brief moments that recall “In A Station of The Metro,’’ as in the quiet quatrain, “Poem”:

When the rain hits the snake in the head,
he closes his eyes and wishes he were
asleep in a tire on the side of the road,
so young boys could roll him over, forever.

This collection includes selections from Stanford’s published and unpublished works, interspersed with fragments from his epic, enormously ambitious poem, “The Battlefield Where the Moon Says I Love You,” where he lets fly against the constraints of verse, and seemingly of language itself:

I have inhaled the fumes of the chicken feathers of death myself
I have dowsed the burning birds I have set the wet feather afire
like the lullaby from the Russian ballet in many tongues but none of them double
none of them spliced none of them forked none of them separated by words.

In a recent, extremely unpleasant notice in the New York Times Sunday Book Review section, David Orr dismissed this volume as “raw’’ poetry, opining: “His story follows an archetypal pattern: A handsome young writer from the backwoods … who has an overwhelming devotion to his art (supposedly Stanford often wrote all day) achieves precocious recognition (he was well known in the Arkansas literary community by his mid-20s) and catches the eye of national luminaries (Allen Ginsberg was an admirer) amid scenes of poetic wildness (one of Stanford’s old friends recalls parties involving shotguns and chain saws) only to meet an early death. Put some leather pants on him, and he could’ve been Jim Morrison.’’

After critically quoting a poem Stanford wrote at 17, Orr notes the widely held belief that many sections of “The Battlefield Where the Moon Says I Love You’’ were written when he was in high school, adding the pithy observation: “This seems entirely possible.’’

This brings to mind the comments of Tom Waits (reportedly a fan of Stanford’s work) upon being admitted into the absurdly named Rock N’ Roll Hall of Fame: “People say that I have no hits and that I’m difficult to work with. And they say that like it’s a bad thing.”

Orr goes on to negatively compare Stanford’s work with a poet who uses the word excrucior.

As Stanford put it, in the terse verse, “To Find Directions’’:

“Go to the graveyard.”

If you go there, you may find voices that tell you of untold things, past and future. But first, you have to listen