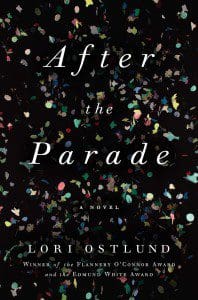 If it’s true that a good man is hard to find, Lori Ostlund’s first novel, After the Parade (Scribner; 352 pages), demonstrates that leaving one might be just as difficult. As the book opens, Aaron Englund has finally worked up the nerve to break up with Walter, his older lover/Henry Higgins of 23 years, with whom he long ago fell out of love. Having packed his possessions, Aaron steers his U-Haul away from the security of their home in Albuquerque toward San Francisco. Not because he wants to join the city’s famous gay scene, but because Taffy, a colleague, lives there and has promised to help him get situated.

A night at a motel in Needles not long after his departure foreshadows a central theme—that of Aaron coming to terms with his difficult childhood. After overhearing an assault in the neighboring room, he shoulders open the door, interrupting a man beating his young son nearly to death while the boy’s mother looks on. Later, the desk clerk on duty during the attack informs Aaron that the kid—whom we eventually come to clearly see as a stand-in for Aaron—is in a coma and may not survive. Aaron doesn’t stick around to see how the drama ends.


With Taffy’s help, Aaron settles into a shabby San Francisco apartment—“the back third” of a garage owned by a Chinese couple forever screaming at one another upstairs—and finds a job at an equally shabby English language school. From there, the book splinters into multiple layered timelines: Aaron’s San Francisco existence just after leaving Walter; his relationship and life with Walter; and his childhood, raised by a brutal policeman father and a traumatized and self-centered mother. The father, we soon learn, died in Aaron’s youth in, of all things, a parade accident. And the mother eventually abandoned a teenage Aaron, disappearing one night, leaving a note in one of his textbooks.“You’re old enough now, the note said, only that.”

Such is the curse of being raised by narcissists. When 10-year-old Aaron falls into an unexplained coma lasting two days, he awakens to find his mother in the hospital room, gazing off in another direction. “Over the years, when he thought about the coma, he thought about waking up in the hospital and looking around for his mother, how that had been his first response, and about seeing her there at the window, how he had wondered—but would never know—whether she was watching something outside in the darkness or simply studying her own reflection.” Later, as a family friend tries explaining his eventual abandonment, he’s told, “When your mother left, she wasn’t thinking about you—for better or worse, she wasn’t.”

Decades of reading have left me with a knee-jerk suspicion of kids in books (as in films), the way they always seem to have the same impossible measure of wisdom and perceptiveness, bestowing their precocity in tidy jewel-like gifts to the reader. But Ostlund steers clear of this problem by making young Aaron not merely precocious (as he arguably is), but also as foolish as children truly are, capturing the complexity of childhood, the way a kid can possess true intelligence while also being confused and ill-informed.

Throughout, Ostlund keeps up a recurring motif of childish miscomprehension regarding language and double meanings. When an uncle informs him that homeless people only want money for their vices, it bewilders Aaron, whose only frame of reference are the vices on his father’s basement workbench. It happens again and again. When his mother describes death as “a permanent state,” adding “Permanent means forever,” Aaron thinks back to the permanents his mother gets at the beauty shop, “which lasted just a few months, the curls uncoiling week by week.” This trope could be maddening, but Ostlund weaves it into the flow of her story with ease. She manages to capture what a stressful and complicated stew childhood can be while simultaneously commenting on words and their inadequacy—themes echoed in Aaron’s life as an ESL teacher, a job that entails constantly breaking down the nuances of language for his students who hail from all parts of the globe and are eager to understand Americans and the new world around them.

Aaron’s pupils aren’t merely cardboard cutouts labeled “Student.” Each seems like an individual, as does every character in the book. The number of characters in After the Parade is, frankly, staggering, but each one stands alone, in possession of his or her own distinguishable identity. That might be easy when it comes to introducing Clarence, a brainy and erudite wheelchair-bound dwarf growing adenoidal tusks from his face, with whom young Aaron spends an evening. It’s much more difficult, however, lending dimension to a depressed old couple he meets as a child, or every customer in his mother’s diner, or each desk clerk at every roadside motel he stays. But Ostlund accomplishes just that. Through each of them, she reveals both humanity’s outrageous absurdity and mankind’s inscrutable complexity and depth.

After the Parade is an unusual book as first novels go, bearing no trace of the typical first-novel foibles. (This is Ostlund’s second book of fiction. Her 2010 story collection, The Bigness of the World, won the Flannery O’Connor Award for Short Fiction.) Even given the many directions the narrative takes, absent is that oft-present manic energy screaming, “I’m throwing in everything but the kitchen sink! No wait, here’s the kitchen sink!” No second-act bogginess, no pacing disasters, no wooden dialogue. After the Parade is a portrait of authorial restraint, sophistication, and insight, of a brilliant structure, and perhaps most of all—and I hope this word won’t put people off—literariness.