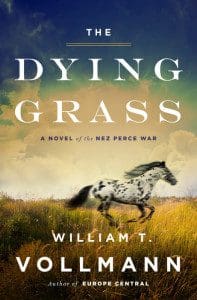 William T. Vollmann’s Seven Dreams series traces the history of the colonization of North America, beginning in the ninth century and stretching into the twentieth, focusing on the bloody conflicts between the continent’s native inhabitants and its settlers. The fifth volume, The Dying Grass (Viking, 1,356 pages), chronicles the Nez Perce War of 1877, a series of skirmishes that took place over the course of several months, and more than 1,000 miles, between the eponymous Native American tribe and the United States military, and which resulted, predictably, in harsh sanctions and the relegation of the Nez Perces to a reservation.

Most of the novels in the series have employed a variety of perspectives and attention-grabbing authorial intrusions; The Dying Grass is no different. Vollman’s proxy in the series, William the Blind, figures as both scene-setter, excitable reader, and actual narrative character, particularly in the novel’s beginning, as he describes in bewildering detail his efforts to recover writings by and daguerreotypes of the novel’s fictionalized historical figures. Vollmann clearly delights in stylistic flourishes and satirical affectations, apparent from the novel’s first page, which includes the sort of unwieldy subheading found in tedious 18th century virtue novels. Vollmann clearly pays attention to literary and historical tradition, and his dry sense of humor breathes life into the more academic sections of the novel, turn out to be its most successful.

Although Vollmann’s notes and errata, which are myriad, suggest he is a meticulous, even fastidious researcher and compiler, many of the structural decisions seem arbitrary, which might have more to do with the novel’s great length than with anything else. The majority of The Dying Grass alternates between the Nez Perce and the U.S. military, and is broken into named sections and subsections; it is written in a unique, distinctive style, which, Whitman-like in its fragmentary repetition and slow movement, uses space on the page to mimic space between dreams and action, between regrets and rationalization. Vollmann understands well that the inexorable forces of history are as formed by whether a private’s random negligence on a certain day cost a side a tide-turning battle as they are dictated by a general’s indomitable will. Even subtler, and more welcome, in a work of historical fiction is the way Vollmann convincingly limns individual subjectivities, portraying their hopes and delusions while showing how they are still products of both time and temperament, of the confluence of the personal and the historical.


And individual subjectivities abound in The Dying Grass. It is chock-full of characters, the main ones being Heinmet Tooyalakekt (a.k.a., Chief Joseph), the Nez Perce leader to whom historians and his white contemporaries ascribed a legendary status, though he seems here a relatively docile and resigned follower of bigger personalities; and the aforementioned Howard, a deeply religious man slowly losing control of his army and worrying about his son, a lieutenant traveling with him. The problem is that Howard’s extant writings about the war and its aftermath, the most germane of which are included in the novel, are incredibly eloquent, compassionate, and perspicacious, and more interesting than anything the fictionalized version has to say. So, too, are there a sundry bunch of American military men and Nez Perce warriors (this is not a novel in which women appear, except under the auspices of loving husbands or brutalizing savages) who, during the course of the war, lament their conditions, scheme, feel the sting of embarrassment, and miss whatever they understand home to be. The lack of dialogue tags encourages a steady absorption of a host of actions, feelings, and unspoken rejoinders, but it makes it difficult to find a foothold in the action. The technique is effective when reading heated battle scenes but less so when one does not know whether something crucial is actually happening. This confusion makes it easy to think one is just skimming the prose, which can be unpleasant and frustrating, and which is not necessarily helped by an extensive glossary, apparently the work of the protean William the Blind. Broken into six sections, the glossary includes one of “Personal Names,” and one of “Orders, Isms, Nations, Professions, Hierarchies, Divisions, Races, Shamans, Tribes and Monsters.” Consistent with all of the included research, it is thorough and wittily framed and written; but the detailed descriptions of named characters, while helpful, offers too heavy a guided hand and makes one wish these attributed characteristics were more easily detectible within the narrative itself.

The U.S. soldiers’ conversations are sometimes funny in their banality, and sometimes terrifying when this banality is that of evil; often they are extremely dull, but in this monotony much is suggested about the nature of the war machine. Here it is not quite well oiled, after having been rent by the Civil War, but carries the terrible suggestion of the improvements to come. The Nez Perces’ sections, on the other hand, are much less interesting. While Vollmann’s attempts to imbue their conversations, big and small, with the color of their language and their culture, are no doubt earnest and necessary, the natural constraint that this places on Vollmann’s rendering of their story creates moments of glaring weakness when compared to the much more repugnant but nevertheless far more interesting dialogue and feelings of the Americans. (Jane Smiley, in her review, noted that this veered on “Noble Savage” territory, but I found it far more inadvertently bland than offensive.)

You’re tired, aren’t you?
A little, father.
I’m very proud of you.
Do you mean it?
Cross my heart.

This is not fun or enlightening to read, even if one assumes Vollmann is trying to depict the awkwardness of father-son bonding within the military during the time; this type of dialogue is found most when tactics are being expositorily discussed, which is both helpful and irritating. Also surprising is how Vollmann’s style works best when depicting the poles of absolute monotony or absolute chaos. A typical battle scene often does not reveal itself to be one until it has already begun, and Vollmann ingenuously obfuscates the action to replicate the all-consuming confusion of war (an indentation represents a break in perspective, or a shift in place, or an opposing action, etc.):

A high planet gleams pure: Mars, no doubt. The dawn smells like water and mint…and
the moon’s reflection broken up into a wriggling worm of white
light and
as the first Indian, some old man, evidently a horse-herder, emerges
from the tipi and approaches the river, the first shot sings:
Pim!
And he cries out quick and high like a hare, then
pim! pim! pim! pim!
falls into the river, as:
Send ‘em to the happy hunting grounds, boys!
We’ll try to get ‘em all, sir.
Hurrah hurrah, hurrah!
Joseph’s dogs barking at last, his horses screaming, Indians rushing from the tipis,
and our boys waist deep in glowing orange river, struggling numb-fingered
up the other bank in an instant and
O, those hateful Indian eyes!

The best moments of The Dying Grass are funny, sad, cruel, sardonic, tender, and critically engaging; they also happen to be outside the meat of the story. In them one can detect a real sense of engagement with the colonizers and colonized alike, and with the troubled history of our country; this is not lost in but smothered by the weight of the novel, which is more reflective of a commitment to profusion of detail, material, and, well, content, and of an experiment with style (albeit an ambitious, fascinating and often successful one) than with a sense of an independently coherent narrative.

I suspect Vollmann intended The Dying Grass to be everything that makes it difficult to read—repetitive, frustrating, often tedious. I also imagine that many readers willing to join the troops and to march through more than a thousand pages will find it pleasant and rewarding to get lost in the hypnotic cadence of the prose. I kept on waiting to be dragged out of it so I could learn what the real General Howard wrote about this battle or that aspect of U.S.-Nez Perce relations, or to hear Vollmann’s gleefully inquisitive and incisive commentary; I was glad when I was. But even the most impatient reader of The Dying Grass could not deny that, even at his most boring, Vollmann is an ingenious stylist; a thorough and generous investigator into the convolutions of violence and conflict of all kinds; and, above all, a welcome voice in today’s literary landscape, uncompromising, sui generis, and worth hearing, if one is willing to slog through the tall grass blocking one’s vision from any sort of path.