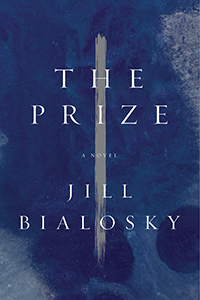 For Edward Darby, the meaning of life can be found in the curve of a well-crafted watch, in an antique table’s warm weight, or in the balancing stroke of paint on a chaotic canvas. The protagonist of Jill Bialosky’s new novel, The Prize (Counterpoint; 325 pages), lives his life according to the principle of cultivating beautiful things. Edward believes structure, attention to detail, and erudite emotion will bring him happiness. He looks to art to reveal the importance of ordinary life, but also as a means to transcend it. Over the course of the novel, the lacquer of Edward’s curated existence—his career as a partner at a prominent New York City gallery, his resourceful wife and sweet daughter, his well-adjusted sense of ownership and loss—flakes away.

Bialosky, an editor, poet, and novelist, probes art as escapism in The Prize. She depicts most of her characters as being in one of two conflicting camps: the purists and the opportunists. Edward’s convictions about true art are called radically into question when a temperamental young ingénue begins to blur the lines between artistic intent and calculated interest. In addition to the muddling of his professional affairs, the quaint home life Edward has strived for has become sterile and detached. Edward’s once doting daughter is now a disinterested teenager; his wife Holly’s refreshing distance from the art world is stretching into a chasm of dissimilarity. As the cracks in his life deepen, Edward recedes further into his devotion to beauty and art.


Mirrored in Edward’s search for “artists who are extraordinary and singular” is his insistence on nonconformity, producing a complicated hubris: Edward may doubt himself, but never his belief in arts’ transformative power. Throughout The Prize, Edward stacks himself up against the men around him, trying to assure himself that he is somehow of a different breed. He balks at men like Alex Savan, another gallery head and notorious art world sycophant. Though Savan and Edward move in the exact same circles, and are often keeping an eye on the same artists, Edward convinces himself that his own motives are not disingenuous or part of some larger scheme. On a business trip to Berlin, Edward assures Savan that he doesn’t have to put on so many airs to network, that he has reputation enough, “though he thought to himself that it wasn’t quite the reputation he would have wanted for himself.” The juxtaposition between what Edward says and these unspoken insightful moments hints at a character who may not be as unadulterated as the art he worships.

Agnes—the sensitive and erratic artist to which Edward’s gallery and career is so indebted—is married to another artist, the significantly older Nate Fisher. Both Edward and Nate advise Agnes, coddle and shelter her from others who they maintain do not hold her best interests at heart. After catching Nate in the city with another woman, “[Edward] wondered whether narcissists like Nate could ever really fall in love. Women were chosen merely to project his own ambitions.” As with Savan, Edward finds comfort in Nate’s temperament—flashy and self-serving—which masks any potential similarities in what he hopes are their different intentions.

The Prize’s strength lies in these subtle distinctions. Bialosky positions the reader closely to Edward Darby; he holds most of our sympathies, but as the story progresses, he also betrays his good-guy image with inconsistencies and even hypocrisy. He’s like a friend whose very insistence that he knows what will bring him happiness and meaning assures you that he won’t find it. Perhaps the most pivotal character in the novel, one serving as a foil, is Edward’s late father, Harry, a brilliant scholar of Romantic poetry who overdosed on Lithium and died young. Like Edward, Harry was also a purist. However, Harry’s devotion to poetry devolved into obsession; his singularity becomes total isolation. In a sense, art is so transcendent for Harry that he floats away. As matters in his professional life come to a head, Edward “began to panic again and his mind went to his father sitting in the darkness of their lonely house, his hands shaking from his meds.” Among his peers, Edward is confident that being true to art will offer his life meaning, but regarding his father, Edward must confront the fact that meaning might not save him, either.

Over the course of The Prize, Edward moves almost exclusively within niche fine art circles. He deals with all the same people, whether in Berlin, Rome, or in a SoHo bar. And when he’s outside of those circles, as when among his suburban neighbors and family friends, he only encounters people who know little to nothing about who is up for the prestigious Tanning Prize or how the outcome could affect Edward. This makes for conflicts that at times can be myopic. (If Edward faced someone or something radically other in his or her perceptions—and not just an art purist or opportunist, or someone apathetic—how might he have been pushed to confront his beliefs?) Regardless, with The Prize, Jill Bialosky delivers a powerful exploration of what happens after one decides unquestionably what the meaning of life is. As Edward picks for significance amid the debris, after all the controversies and gossip, after all that is done and undone, he asks, “What difference did it make?”

“He shook his head and sighed.”