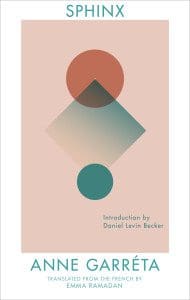 Beyond the elegant, geometric design of its cover, Sphinx (Deep Vellum; 120 pages; translated by Emma Ramadan) is an ambiguous, multifaceted beast. With its third publication, Deep Vellum, an eclectic Dallas press, brings the work of French writer Anne Garréta to English readers for the first time. Nearly thirty years after its original publication, Sphinx also marks the first English translation of a female member of Oulipo (short for ouvrir de littérature potentielle, or “workshop for potential literature”), the exclusive, prestigious writer’s workshop that included George Perec and Italo Calvino among its members. (Garréta is the first member of Oulipo to be born after its founding.) The goal of so-called potential literature is to restrict or manipulate language structures to open up the narrative possibilities of literature. And, indeed, there is something both freeing and unsettling about the prose of Sphinx. Though the sentiments at the heart of the novel are universal–love, passion, and melancholy–the agents of such feelings are strikingly absent, phantom-like forms that refuse to be pinned to the page and examined as specimens.

This is not to say that the novel lacks specificity. The setting is the seedy, erotically charged underbelly of 1980s Paris. Within a slough of nightclubs and cabarets (with symbolically suggestive names like the Apocryphe), our narrator slips from the diligent life of academia into the nocturnal lifestyle of a DJ. It is during this transition that the narrator falls for the alluring A***, an African American expat from Harlem. In fact, as fate (or, more likely, Garréta) would have it, the two meet at a club called the Eden, where A*** is working as a dancer. Could A***, with those three garish little stars, be some sort of homage to Adam from the Garden of Eden? There certainly is something inherently divine, definitely sublime, about A***’s perfect, agile body, which is often the object of our narrator’s (and therefore our) gaze. Though the comparison seems ill suited when we are reminded that A***, whose gender we’re never sure of, is notoriously promiscuous and spends long hours binge-watching television.


It seems fitting that historians do not agree on a definition of the sphinx. Most sources describe the creature as an amalgamation of parts, with the body of a lion and the head of a human. A few sources adjoin a pair of wings to the creature. The confusion only deepens when we notice that in Egyptian mythology, the sphinx is distinctly male; in Greek mythology, she is female. Garréta’s mastery is in never committing to one allusion or formation, like the mythological sphinx. Subsequently, she avoids didacticism, while still hinting at moral and philosophical dilemmas. From the very beginning, the story is framed as a symbolic fall from grace. As our guide through a modern Hades of sorts, our narrator asks, “Is it blasphemy to insist that my lucid crossing to hell was a direct road to redemption?” These kinds of lines tempt the reader, who desperately wants to make sense of the text, to impose structure and meaning based on familiar models. The reader of Sphinx is inherently self-conscious, continuously inserting, and then retracting, his or her assumptions generated by the perceived gaps left by ambiguity.

A modestly thin book, the novel reveals a cavernous depth. This profundity emerges less from the subject matter than from the way it is told, although, as we will see, language ultimately affects its content in surprising ways. The fact is that Sphinx is at its core an extremely ambitious experiment pushing the boundaries of language. Heralded by some as a genderless love story, it manages to never reveal the gender of either narrator or A***. One has to be careful, however, in labeling this text queer or genderless literature, though the current political climate certainly pushes one to make such connections. The label genderless assumes that what is unnamed is vacant, a massive though common misconception. What Garréta achieves is a masterful and deliberate failure to specify. Simple enough in theory, the result is a labyrinth of linguistic twists and turns as the author (and now translator Emma Ramadan) evades pronouns and other gender-specific language. By refusing to pin down the two lovers’ genders, she opens up the apophatic nature of language, while forcing the reader to confront his or her own discomfort upon facing an abyss of uncertainty.

The strenuous nature of these linguistic gymnastics may explain why it has taken nearly 30 years for the novel to be translated into English. The translator of an Oulipian work needs to be just as agile, just as daring as the original author. Working within the constraints of the original text, Emma Ramadan maneuvers through the entirely different terrain of the English language. In some ways it seems that the experiment may in fact be easier in English than in French. After all, in English one only has to avoid pronouns and a few pesky nouns (such as “husband” or “actress”) to evade gender altogether, whereas French demands strict gender agreement between nouns and most adjectives and past participles, as well as some preterit verbs. While this may have eased the translation process in certain ways, Ramadan had to be sure not to obscure the subtle ways in which Garréta’s language choices affected the content. As the translator points out in her note at the novel’s end, Garréta made a stylistic choice to mainly use the imperfect verb tense in order to avoid those preterit verbs that begin with the auxiliary verb aller. The imperfect, besides requiring no agreement with gender whatsoever, carries the meaning of habitually doing something in the past. Though there is no precise equivalent to the imperfect in English, Ramadan mimics the openness of these verbs by introducing the conditional “would” before most verbs to give a feeling of habit. And it is this verb tense that is surely responsible for the enduring heaviness of the prose, for the habitual malaise, which the narrator refers to almost ritually as ennui.

The constraint informs the narrator’s fascination with bodies as well. Playfully skirting the issues of gender and sexuality, Garréta manages to sidestep the pronouns he and she by substituting bodies for people. As a result, her narrator’s passion is, self-admittedly, “the contemplation of bodies.” Pronouns are no longer necessary, as body parts become the true protagonists. It is the body that moves, that sways, that touches, that acts, rather than the body’s owner. The affect is a fractured world. People fill the clubs and yet their presence is rarely felt apart from the swaying of murky forms.

Sphinx envelops its reader in its seductive atmosphere. The narrative raises questions like a half-extended hand, refusing to do all the work and requiring complicity from the reader. Backstage in the dressing rooms of the cabarets, the narrator catches a glimpse of his or her reflection, but what does that image look like? The answer cannot be contained on a single glossy pane of glass. It is an amalgamation of parts, shifting with each new myth it inhabits. And this is what makes it an Oulipian text. It asks us to reconsider the role of language. It asks us to look into that dressing room mirror and revel in the multifaceted creature we see, too profound to be contained.