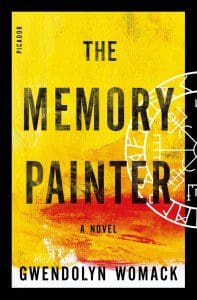 Gwendolyn Womack’s first novel, The Memory Painter (320 pages; Picador), is a historical and scientific thriller fueled by themes of reincarnation and identity. World-famous painter Bryan Pierce is at the mercy of sudden trance-like states wherein he is able to paint moments of beauty and pain from his past lives. His art acts as a distress call, and it’s answered by Linz Jacobs, a neuroscience researcher. When Linz visits an art gallery and recognizes in one of Bryan’s paintings an image from a recurring childhood nightmare, an immediate connection to the artist soon becomes an exploration of shared history and past mysteries.

In an early chapter, Linz gives a tantalizing overview of her research team’s current project into brain mapping and memory access. As her relationship with Bryan deepens, Linz verifies the historical accuracy of Bryan’s paintings. She remains skeptical, though, even as her emotional instincts threaten to leapfrog the scientific method. Later, Bryan’s visions will feed into Linz’s research and lead to a wonder drug that could change the world.

Even with the full memories from dozens of past lives, Bryan and Linz are lonely, dejected, and confused about love. This is perhaps the most interesting aspect of The Memory Painter. Supposing reincarnation is real, the novel asks, is the individual the sum of past deeds or of future potential? Do love, hate, and past motivations resonate in the present? As Bryan emerges from each vision with cryptic clues about himself and the skills he’s mastered during hundreds of years of living (for example, Bryan’s fluency in multiple languages), he and Linz fight to retrieve who they were so they can ultimately understand who they now are.

Womack has crafted a dark story defined by fast-paced prose that at moments sings poetic (lines such as “a mental precipice that threatened to give way” and “a lone iceberg floated to the west like a silent witness”). While the engine of character discovery runs full throttle in The Memory Painter, at times the narrative map between plot arcs is too visible. Nonetheless, at the novel’s conclusion, all story threads have been tightened into a snug, satisfying knot.