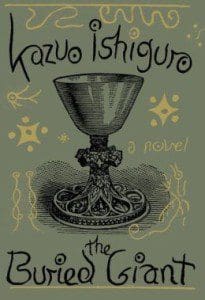 Critics and readers will find it difficult to say exactly what Kazuo Ishiguro’s latest novel is. His first novel in ten years, The Buried Giant (Knopf; 317 pages) marks a daring departure from the tortured and unreliable first person accounts his readers have come to expect. Some will exaggerate this departure, and yet Ishiguro’s prose remains undisputedly his: lyrical, patient, almost simple, but with lingering notes of deception and the unsaid.

It may be that his subject matter refuses categorization. Despite the appearance of ogres and pixies among its pages, The Buried Giant is not a fantasy novel. Although it recounts a quest to slay a dragon, it contains little of the narrative drive found in classic adventure tales. The protagonists are two elderly Britons, Axl and Beatrice, who are deeply devoted to one another, and yet this is not a love story. Ishiguro even goes so far as to directly borrow a literary (and historical) character, portraying the aged Sir Gawain, King Arthur’s nephew and a Knight of the Round Table, who, despite the changing times, continues to lug himself around in a full suit of rusted armor. But this is not an Arthurian legend either. So what do we call it?

Perhaps this is the wrong place to begin. If Ishiguro has taught us anything with his eclectic body of work it is that genre can be deceiving. His award-winning novel Never Let Me Go (2005) forayed into science fiction with a story of clones that were raised exclusively to have their organs harvested at a young age, while The Remains of the Day (1989) treads along the edges of historical fiction in its portrayal of a butler in early 20th century England. Still, Ishiguro himself has said that these particular settings merely fit the core themes he wished to address. Ishiguro’s process is to construct, beginning with the crux and spooling the details around it, summoning characters, timeframes, and settings that serve his purpose. I believe that is what gives such a controlled feeling to his prose. His fiction is carefully curated and modest, favoring sparseness over excess.


We see this summoning process in action in the initial pages of The Buried Giant. The narrator beckons the reader with the familiar ease of an elder recounting a fable, and Ishiguro begins to assemble the pieces. The setting is post-Arthurian Britain: Saxons and Britons coexist peacefully in neighboring villages spread across the vast and desolate countryside. Our narrator explains that disease and ogres were commonplace during this period of isolation, darkness, and superstition. The initial pages read like a parable and, though some may find its tone too didactic, they prepare the reader for how the novel is to be read. Skirting the edges of cliché, Ishiguro plays with symbolism and allegory. Light and darkness are employed to portray the wave of forgetfulness that has cursed the land’s inhabitants, which our protagonists refer to as “the mist.”

Here Ishiguro reveals the central theme of the novel: the loss of collective memory. Speaking at the First Congregational Church in Berkeley recently, Ishiguro explained that he had wanted to shift his lens from personal memory to a larger scope. He mentioned post-apartheid South Africa and post-Vichy France as settings he had considered for the novel, for in both the question arose: at what point, or to what extent, must a nation forget its history and move on? And yet, Ishiguro chose the darkest days of British history, a time period for which the history is most vague and the literature and mythology the most prevalent. The reason for this time seems clear. It allows for Ishiguro to allegorize freely, relying upon our own “mist” to shape and develop a parable at once collective and strikingly personal.

In a bold move, Ishiguro makes clear allusions in his novel. He seems not to suffer from the dreaded anxiety of influence, which, according to Harold Bloom, most if not all authors experience. Instead, he embraces the momentous and rich literary history the setting warrants. In a clear reinvention of Plato’s cave allegory, the Britons live in tunnels below ground in near darkness, at times gathering around the communal fire, the light of which does not reach the far recesses of the dwelling. A few, James Wood among them, have criticized Ishiguro for his so-called heavy-handed use of clichéd symbolism. The fact remains that the author employs these symbols and clichés not as a literary crutch but rather as a form of logic. While contemporary literature has a proclivity toward the psychological, the inhabitants of post-Arthurian England conceived of emotions and unexplained incidents as external elements, impacting one no differently than would a gust of wind. After unexplainable deaths, they would blame demons or pixies, going so far as to embed sightings of the creatures in their memories. In Chrétien de Troyes’ Arthurian legends, for example, emotions exist as personified forces acting upon people rather than emanating from within as we conceive of them today. De Troyes may describe Love grabbing hold of Lancelot, physically restraining him, or else the knight’s thoughts or feelings may reveal themselves in the landscape. Therefore, the use of the word “mist” throughout the novel is anything but a tired euphemism for amnesia–it is an adherence to a logical structure.

This system becomes especially apparent in the pervasive superstitions. The elderly couple is prohibited from owning even a single candle to illuminate their room, a law that their fellow villagers enforce, though the reason for it is not entirely clear. Cliché though it may be, light signifies sight and freedom, and denying it functions as a mode of punishment and imprisonment. And so, quite like the man who, as Plato describes, leaves the allegorical cave in search of truth, the early pages show Axl sitting at the edge of the dwelling’s entrance, watching for the first signs of daylight.

What follows is a journey both across land and toward remembrance. The couple decides to leave their village and set off to visit their son, whom they have not seen for a long time, though due to “the mist” they do not remember why. Along the way they encounter a Saxon warrior on a special quest, an orphan boy with a mysterious wound, and the rambunctious, elderly knight Sir Gawain.

As I mentioned, The Buried Giant is a departure from the classic first person narrative for which Ishiguro is so well known. While the narrator certainly maintains an initial presence, he soon fades into third person omniscient, describing the land while flitting in and out of the minds of, primarily, Axl, Beatrice, and the Saxon boy. Leading the reader through the landscape in the company of this odd collection of characters, the narrator traces another, metaphysical terrain into the recesses of memory as the past takes shape, dimly at first, then crystallizing into horrifying reality. During a couple of chapters placed intermittently, Ishiguro unexpectedly switches to first person and Sir Gawain takes over as narrator. These chapters stand out as a sublimely subtle mixture of darkness and humor. Sir Gawain embodies the ambiguity of the past. Were Arthur’s knights heroes or were they savage murderers, no better than the warring Britons and Saxons who raided villages, killing women and children? Simultaneously haunted by the violence he committed and proud to belong to Arthur’s ranks, the knight is the truly tragic character of the novel. Like a Shakespearian fool, he oscillates between wisdom and senility. He is able to remember the past with clarity and repeatedly warns his fellow travelers of the ramifications that remembrance may bring, both in terms of their individual relationships and the well-being of mankind. And yet his authority is often undermined by his aging mind and irrelevance. Not unlike Cervantes’ Don Quixote of La Mancha (in fact, his thin, aging demeanor bears a remarkable resemblance to the Spanish knight), he displays an exuberant and clumsy pride, despite the fact that, in these peaceful times and without the leadership of a great king, his occupation has become obsolete.

Like Sir Gawain, dressed head to toe in burdensome metal, the symbolic novel too may be suffering extinction. The psychological novel may declare itself king, and yet in a strange reversal narratives navigating the oddities and struggles of the individual mind have become a much too familiar terrain. Instead, Ishiguro offers us an uncharted land, before time and traction produced roads, before the establishment of psychology, and we are left to contemplate the boundless landscape of possibility before us.

One thought on “Finding the Logic Cloaked in the Mist: ‘The Buried Giant’ by Kazuo Ishiguro”