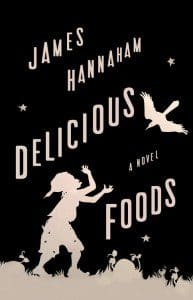 James Hannaham’s striking new novel, Delicious Foods (Little, Brown; 384 pages), digs deep into a son’s loyalty to his mother and deeper into his mother’s dependence and addiction to crack cocaine. When Eddie’s mother, Darlene, fails to return home, he begins a search that leads him to Delicious Foods—a farm where addicts, lured with false stories and promises, are forced to work for next to nothing and are unable to leave.

The prologue of the novel begins with the end. Eddie escapes Delicious Foods, but freedom comes with a price. Hannaham introduces us to the horror of this world, when on page one he describes Eddie driving a stolen SUV, steering with the nubs of his wrists—his hands having been recently sawed off. Though we learn in the prologue that everything ends up O.K. for Eddie, one question central to the entire novel haunts him: Will he ever be able to save his mom from her demons, and will he ever be free of his own?


Delicious Foods is told from three points of view: Eddie, who at twelve searches for his drugged mother, only to end up at Delicious Foods; Darlene, whose POV functions mostly as flashback—showing us how she went from college student to happily married woman to lonely widow to drug addict; and Scotty, who embodies crack cocaine. Scotty is the drug inside Darlene (and the majority of the characters in the novel), and he has a voice, a tone, and an attitude.

Eddie’s point of view is important because with him being the only sober person in the story, he serves as the voice of reason, as the readers’ direct connection to the truth about Delicious. But Scotty serves an even more interesting role because he depicts the skewed realities of every character high on him. He acts as omniscient narrator, knowing all the thoughts and actions of everyone taking him, which is everyone on the farm. Whereas Darlene and Eddie are presented in the third person, Scotty speaks to the reader in the first. He has a street-wise, crude voice, and is full of truths. Scotty delves deep into the psyche of Darlene, revealing the depth of her addiction well before she herself has come to terms with it.

The greatest strength of Delicious Foods is Hannaham’s use of language. It seems clichéd to say the language itself is magical, but there is a certain tenderness and care Hannaham takes in relating this story about drug addicts on a farm wasting away in barely livable conditions. Between the stories of an adolescent who has no choice but to grow up way too fast, and a mother haunted by her past and unable to cope with the present, Hannaham is still able to instill beauty into the narrative through his prose. Take the scene where Eddie—who had indirectly started a fight—is forced as punishment to beat Tuck, his closest friend on the farm, with a shovel. If not handled well, a scene like this could decrease a reader’s sympathy for Eddie. However, Hannaham does the exact opposite, increasing our concern for both Eddie and Tuck and the unfortunate world they live in:

“Eddie struck Tuck lightly on the thigh at first, and muttered an apology he hoped Jackie and Hammer [the overseers] would not hear.

“Tuck stumbled, but stood his ground. Eddie’s blows grew sharper and more impersonal. Tuck took up Eddie’s message where he’d left off, and every time the scoop of the shovel made contact with his shoulder blades or the backs of his thighs or, eventually, his head or his neck, and he feel to his knees and then to the ground, he forgave Eddie out loud. It’s okay, he said, it’s okay.”

While working at the Delicious Foods farm, everyone daydreams about the future—how when they earn enough money they’re going to get out and play music, open their own shops, fulfill their longtime ambitions. Daydreaming becomes a means to freedom in lieu of being free. Until they can leave the farm, all they can do is daydream to cloud their reality—they can’t pay their debts, they probably wont stop using drugs, and they’ll never leave Delicious. Some will (such as Eddie), even if most won’t. And it’s this hope that roots deeply into this beautifully tragic tale.