In Kathryn Davis’ novel Duplex (Graywolf Press, 195 pages), the suburban mundane is interrupted by the magical, the mythic, and the bizarre. In a neighborhood of duplex housing, kids play on the street as robot neighbors fly past them, sorcerers and Bodies Without Souls drive by in Mercedes, and teddy bears become human babies. Two coexisting narratives alternate from chapter to chapter, as two worlds slide past each other and often overlap. The intimacy between these worlds is such that the particularities of each echo the other, the realities of both merging into one.

The novel, recently published in paperback, follows such characters as Miss Vicks (who is described as “a real woman; you could tell by the way she didn’t have to move her head from side to side to take in sound”) and her neighbor, Mary, who happens to marry a sorcerer; robots who look like people, a baseball player who sells his soul for success. The narrative of this cast alternates with that of the narrative of Janice and the neighborhood girls, who, as though at a sleepover, listen to their cooler, older peer,as she tells them stories about the phenomena of their world. Janice’s stories, many of which could stand alone as fables, do more than just interrupt the more linear narrative of Miss Vicks and those around her. These stories ground the world of the novel as one with a long history of bizarre occurrences that are perceived as both mystifying and entirely ordinary by its characters.

One way of allowing yourself to experience the brilliance of Duplex is by accepting that the novel thrives in its departure from logic; the text is not there to hold your hand. The reader instead treads through the thickets of the strange, often leaving one scratching her head. Those wishing to follow a story whose plot has a traditional structure, with a clear climax and conclusion, might not find what they expect, but they will find themselves bedazzled and delighted with the narrative’s unconventionality. We spoke with Davis via email about Duplex and the uses of plot and genre in her work.


ZYZZYVA: The novel begins, “It was a suburban street, one block long, the houses made of brick and built to last like the third little pig’s.” Referencing a fable, both in the context of a suburban setting and in the first sentence of your novel, prepares readers for the world they are entering. How do you see yourself working toward “training” the reader to read your writing? What do you hope the reader will experience through “being trained” to read the strange and surprising conglomerate of worlds in Duplex? 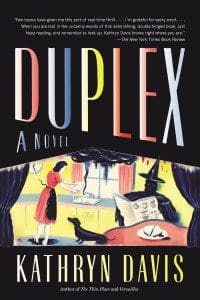 Kathryn Davis: That opening sentence you’ve quoted here is a perfect example. Chiefly, I hope it’s the tone of the sentence that “trains” my reader, helping him or her realize how whenever something implausible, fantastic—impossible, really!—occurs, it will occur in the most matter-of-fact way, as expectable as brushing your teeth before going to bed, or watching the sun rise in the east in the morning. I spend a lot of time early on hearing the tone of a novel I’m writing in my mind’s ear. This is one of the ways a writer is able to make contact with her reader on a non-literal level, via a sort of Vulcan mind-meld—a place that exists beyond the realm of actual language.

I want my readers to feel like they’ve opened a door to a world that is both familiar and unfamiliar at the same time—a world in which the familiar and the unfamiliar become one and the same thing. I want my readers to enter the world of the book fully, to believe—while they’re in it—that it’s as real to them as it was to me while I was inside it, making it. I always think any book worth reading should feel like a trip to a place you never knew existed but once you’re there you know it’s where you always wanted to go, and when you leave it you have a hard time forgetting it.

Z: What relationship do you have as a writer with the fable, speculative fiction, mysteries, and realism? How are they all related, and how do you use these genres and styles as tools to tell a story?

KD: When I was a little girl my mother read Alice in Wonderland to me; I felt like the book was about my life. I often heard inanimate objects like dolls speak. I often was in thrall to the shifting scale of things in the world around me; adults often said things with great seriousness that made no sense or became suddenly furious or sad for no discernible reason. I could think I was walking to my best friend’s house and find out that I was headed through my own front door. All of which is another way of saying that from the outset realism and the fantastic seemed very much like the same thing to me. I’m sure this is why so-called genre fiction, most specifically murder mysteries and speculative fiction, horror stories and ghost stories, appeal to me. Something is always off-kilter. There’s a dead body in the living room. Time is out of joint and people are traveling through it. A coffin floats past the parlor window.

Z: Duplex is split into two alternating “narratives”—that of Miss Vicks, Mary, and the sorcerer, and that of Janice and her stories. The novel often reads more like a visual and lyrical experiment than a conventional narrative, focusing less on plot and more on the subtleties of the world(s) you’ve painted in beautiful language. How experimental was this form for you? Would you say you’re more interested in creating worlds than in creating seamless plots?

KD: I suppose this question boils down, finally, to what is meant by “seamless plot,” a question I’d like to approach obliquely. In two separate Q&A sessions recently I’ve been asked how a writer knows when a piece of writing is finished. It’s a difficult question to answer (almost as difficult as the one about plot), because while we tend to associate “finished” with “perfect,” the greatest works of art (I’m going to dare to generalize here) are always imperfect. Perfection, in a work of art, spells lifelessness; if there are no holes, where does the air get in? Of course it’s unattainable, but when perfection is an artist’s guiding principle the resulting work of art often turns out to be dead. Maybe it’s the difference between that great and moribund novel Madame Bovary and that even greater, wild novella A Simple Heart. I love narrative. I love feeling like I’m moving from the beginning of something to the end of something. But if the means of getting from point A to point Z seems, too, well, plotted—if logic prevails over mystery—then I lose interest. I’ve been thinking a lot lately about the role played by transition in my work. You might think of transition as a kind of hole, a place where a narrative flies unimpeded by words across a narrative abyss. For me, the moments of transition in a story are the moments that, for me, most deeply define the story’s plot.

Z: How do you strive to create meaning in your writing?

KD: I guess I don’t strive. I believe (and hope) that everything I write—or at least everything I write that ends up being worth reading—has its source in that part of me that is most alert to whatever we mean by meaning. In a way this is a question about how I decide what to write. One way I know that I’m on the right track is that there’s a sense of inevitability about the words, the sentences, the linking of those sentences into paragraphs and then into longer units, into narrative, and that the sound of everything—the tone of it—is the only possible one for this particular story. Another way to say this is that if I’m writing the book I’m supposed to be writing, then meaning takes care of itself. The meaning is as much a part of me, of who I am, as the way I walk or eat spaghetti. Of course it’s very easy to find ways to avoid releasing that aspect of yourself—the one where meaning resides. Then you start to get bored, the surest sign that what you’re writing is meaningless.