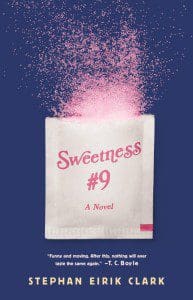 Stephan Eirik Clark paints a satirical picture of an American past that remains with us in Sweetness #9 (353 pages; Little, Brown), a vision into the passive life of flavorist-in-training, David Leveraux, whose family eats “stillborn” microwaveable meals and watches personal televisions, which echo to each other down the halls in a sort of Bradburian way. David also carries a secret that has expanded the nation’s waistband even as it has begun to unravel our society’s psychosomatic seams.

Full of life after marrying and getting a job at Goldstein, Olivetti, and Dark (Clark is not shy with the acronym), David soon conducts toxicology tests on Sweetness #9, an artificial sweetener. He feeds rats varying amounts of the eponymous and sugarless sweetener only to discover that it produces “the primitive desire to eat,” alongside depression, anxiety, and mutism. He is outraged to discover the corporation is hiding the results—they replace all of their obese test subjects with skinny ones—and is subsequently fired. After failing to get another job, Leveraux begins to work at a gas station, and eventually commits himself to a mental institution.


David’s descent into apathy and passivity is not happenstance. Clark carefully plots his way through the novel: his protagonist’s actions throughout are justified by either the symptoms of the sweetener, which he ingested in its testing phase, or the logic of a man trying to make his way in the American economy. David worries about not finding another job in the industry if he becomes a whistle-blower, and he sounds crazed when he tells his coworker that Louie, a testing rat he watches closely, is depressed. He cannot reveal the secret of Sweetness #9, even to his family, and the product goes on to be approved by the FDA, becoming the most popular sweetener in America.

Clark’s work approaches the absurdity and intense satire that Kurt Vonnegut achieves. Interestingly, Clark happens to break one of Vonnegut’s supposed writing tips—”Start as close to the end as possible”—and to good effect. Giving us the Leveraux family history dramatizes the creeping effect of the sweetener on an intimate scale, but also across America, as, after twenty plus years of exposure, supermarkets begin to be targeted in extremist bombings—terrorist attacks in which diet ice cream and the like are rigged to explode.

Though the internal logic of Sweetness #9 holds up, it tends to oversimplify the story. Leveraux is a passive character who moves with no desire other than wanting to work with his mentor, Ernst Eberhardt. The plot meanders as a result, resulting in a revelation late in the book that feels inconsequential; Sweetness #9 as a narrative device dominates even plot twists, degrading them into comedic conspiracies.

Clark’s prose glows warmly at times, though, like the neon pink sweetener through its thin paper packets. (Upon throwing away all the products in their home that contain Sweetness #9, Leveraux thinks, “I emptied the bag into [the garbage] and we stood for a moment over the detritus of our sweet and colorful past.”) And the absurdity of American food processing melds with comedy. David’s daughter, Priscilla, asks of a breakfast grapefruit, “Is this in season?” to which David replies, “‘Pardon?’ I couldn’t remember the last time I’d heard the question. ‘I don’t think we have those anymore.'” When describing his son, Ernest, a polar opposite of Priscilla, Leveraux thinks, “Churchill once spoke of Russia as a riddle wrapped in a mystery inside an enigma; if I were to speak of Enest in a similar way, I might describe him as a corn dog wrapped in a slice of pizza stuffed inside a Hot Pocket.” The novel is injected with these one-liners, punch lines that seem as if they come more from the author than out of the story. The comedy functions more truly when it’s integrated into the plot elements, where it often becomes absurdist and is always underscored by severe medical issues, such as when Ernest ceases using verbs in his speech, leading his parents to conspire in getting him to do so.

The elements and style of Sweetness #9 are not always uniform: the work moves among family story, satire, absurdist Palahniuk-like novel, conspiracy mystery, and, eventually, distilled into metafiction (thanks to a footnote). But its punching bursts of sweetness, that repeatedly bloom over the palate only to disappear too soon, are memorable.