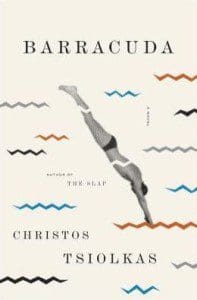 In Christos Tsiolkas’ new novel, Barracuda (429 pages; Hogarth Press), we get an enormous book with enormous themes, and a surprising narrative form featuring a protagonist who can be shockingly unlikeable. A contemporary Bildungsroman set amid a vast landscape of social and political issues, Barracuda nonetheless centers around one man—a sports hero—whose personal respect and dignity are what truly are at stake.

Danny Kelly is a talented teenage swimmer from a working-class neighborhood outside of Melbourne. His life is uprooted once he enrolls in an elite private school (which he refers to as “Cunts College”) on a swimming scholarship. There he instantly becomes the victim of bullying from his peers, and a target of jealousy from his swim squad. To spite his classmates’ elitism, Danny protects his ego by outperforming them all in the pool, reminding himself constantly that he is “better, faster, stronger” than everyone. This mantra becomes deeply embedded within him, and we watch as he becomes much like a barracuda—a “psycho,” monstrous, unsympathetic, competitive, and violent.


Tsiolkas sets his story amid the tensions and biases of both Australian society and international cultures. Most of his characters are second-generation Australians, and through them he explores a diverse patchwork of socioeconomic worlds, including Danny’s suburb and posh school but also a prison, pubs, vacation beach towns, and foreign cities. Danny’s blue-collar background is the filter through which we experiences these places—for example, his first day at his new school comes across as almost otherworldly. The boys at the school are clean cut, lacking acne and bad posture, and the school grounds lie secluded and separate from warehouses or city streets. The difference between Danny and his world and the upper class students and theirs is physical. And it’s upon the physical that Danny’s youth is grounded—his body, his strength inside the water, his violence outside of it, that he unknowingly uses to create a kind of physical and psychological defense against anything that he feels might threaten him. As the novel progresses, these early defenses are what damage him, what turn him into a criminal, and what he ultimately fights to break down in his adulthood.

The scenes from Danny’s youth, at least in the first half of the novel, are all told in the third-person, while those of his adulthood are told non-chronologically in the first. (Later, this pattern becomes confusingly un-regimented.) Though slightly contrived in terms of style, this technique works in that the resulting gaps in the narrative create tension as the story only hints at rather than reveals the details of Danny’s failure, his violent acts, and the events that lead him to become phobic of water. (A volunteer caretaker after he gets out of prison, Danny can’t even do his job and get into a pool with a patient recovering from brain damage.) Unlike the scenes of the protagonist’s adulthood, the sections on Danny’s youth often seem repetitive and narrowly focused. But, in a sense, this works because the young Danny is an obtusely limited person, focused on his swimming to the point of obsession and selfishness.

In the first half of the novel, as sections move sporadically across the timeline of Danny’s life, the plot moves relatively conventionally through Danny’s triumphs until he comes in fifth at an international championship and leaves the pool crying and spluttering with fury, ending his swimming career in a less than honorable way. This outburst of shameful sportsmanship is surprising yet unsurprising, We have seen Danny grow into a proud, individualistic character, and his reaction to his defeat—his inability to compose himself enough to shake hands with his competitors and to realize failure is an important hiccup on the road toward success—seems inevitable.

Tsiolkas’s inventiveness with his novel’s structure and prose sometimes doesn’t work as well as it could. For example, there are several scenes in Barracuda, including the novel’s climax, that are written in bursts of long, winding sentences as in the stream of consciousness mode—a mode that invites complexity of content and form and allows the story to pursue untouched psychic territories. The climax, set on the night of the 2000 Sydney Olympics Opening Ceremony, is beautifully written if extremely violent, but the moments captured there are, ultimately, more action-driven rather than psychologically insightful.

Still, the novel’s pacing and the surprising changes we witness in Danny’s character make up for much of the stumbles. As we follow Danny as he enters and exits prison, his complexity, along with his relationships with his lovers, friends, and family, grows exponentially. Danny, who once had no time to explore his sexuality as a teenager, discovers a gay identity in prison. Once he is released, he becomes a hermit, preferring the silence and seclusion of his plain-walled apartment, having discovered peace in the tightly regimented order of prison. That Danny has found calm and sexual liberation while in prison is one of the more intriguing aspects of his character. It’s his growth as a person that carries us along in the final sections of the novel as he tries very hard to build a route toward redemption.