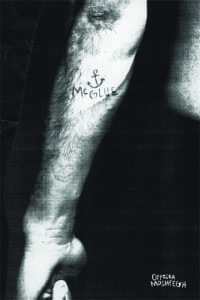 At the heart of Ottessa Moshfegh’s first novel, McGlue (122 pages; Fence Books), is a man who dampens life and feeling with drink—a man who is accused of murdering his best friend. Set in the mid-19th century, atop the high seas and throughout New England, the eponymous protagonist awakens aboard a ship, banished to the hold where he languishes drunkenly. As McGlue’s trial for murder approaches, the narrative moves backward in time, through the haze of memory obfuscated by a massive crack to McGlue’s head, which he received falling off a train. Moshfegh, whose stories have been published in The Paris Review, Fence, and Noon, is highly attuned to the tradition of the novel— she rarely reveals the protagonist’s internalized thoughts (a convention of 18th century authors like Defoe and Sterne), allowing the novel to dance smartly around the edges of perception and morality, and sustain the mystery of the murder while inviting an existential reflection in the reader.


Moshfegh delivers her novel in the first person, crafting a poet out of McGlue, an imprisoned man who considers his body as it atrophies in confinement: “I look down at the lovely alabaster ridged cliffs and valleys of my body…” He describes the drunk cabin boy as having a “wolfish smile,” and his mother, after he wrenches a knife out of her hand, as having a “wrist, dry and pointy and like made of crinkled papers.” On sobriety: “My head is clear now, the night sky sparkling like wet, broken glass.” That a man who is largely illiterate should also be so lyrical in his thought seems slightly out of place. But when McGlue drinks, everything seems to flow for him; alcohol makes him bolder, he can read things in context. In fact, he can really only function normally with a drink in his system. “I cannot sleep without having already forgotten my name, my face, my life.” This is not simply a tale of a drunken sailor—McGlue’s drunkenness fuels character development and steady plot exposition. But it is also no coincidence that McGlue has a head wound. (This is reminiscent of Goethe’s The Sorrow of Young Werther, in which the protagonist, because of the torture of unrequited love, shoots himself in the head). Where his drunkenness would threaten to dissolve into simple lyricism, the crack McGlue keeps digging at serves as a sustaining symbol of his lack of reflection.

Throughout the novel, McGlue sees his slain friend Johnson in hallucinations, smoking in the ship hold, materializing out of the shadows of his jail cell. McGlue cannot understand, does not believe, Johnson is dead. Or if perhaps he does, he thinks Johnson had wanted to die anyway, had in fact asked for it. (“It makes some sense, though I know I’m dreaming.”) In a later scene, Johnson walks into the sea, flailing with the whitewater at his shoulders. When paired with other fleeting admissions by Johnson of depression and “madness,” this event is painted as a failed or halfhearted suicide. Johnson is a mysterious character, a Gatsby of sorts, condemned to dissatisfaction with his life as a result of his secret—a secret McGlue has sealed in blood.

This mystery—as well as the cloaking of  McGlue’s sense of self, of his motivation, of his actions, even— comes to full fruition when the truth of Johnson’s murder is divulged. The resolution, much more than the solution of a “whodunit,” reveals clever omissions of thought and speech. Propelled by a masterful combination of lyrical prose, mystery, and plot, McGlue is a highly impressive novel about the oppressed self. Ottessa Moshfegh commands fiction with natural grace and is a modern voice to be reckoned with.