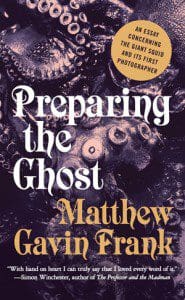 Matthew Gavin Frank retells the thrilling tale of the first photograph taken of a giant squid in Preparing the Ghost (Liveright; 282 pages). In his unique and captivating work, Frank incorporates memories from his own life with the unlikely story of Moses Harvey, the Newfoundland reverend who captured a giant squid on film in 1874.

Among the personal threads Frank weaves throughout the book is that of his Poppa Dave, his maternal grandfather who was born prematurely and small, so was force-fed by his mother, eventually becoming a chronically obese and diabetic adult. As a grandfather,  “perhaps the sequence of words Poppa Dave uttered most frequently,” Frank writes, was the most beloved of phrases grandchildren everywhere want to hear: There’s always room for ice cream. Of his great grandmother, Frank writes, “Though he was obese at age four, Dorothy continued this practice believing she was doing the right thing,” and although she established a lifestyle that would lead to Poppa Dave’s eventual death, her actions are presented as motivated by pure motherly kindness.


Poppa Dave’s personality often blends into the mysteries of the giant squid. In Frank’s family, Poppa Dave was the one who told tall tales. He tells Frank a bullet wound he got while in the army was really a scar left from a squid attack. And the author remembers the songs his grandfather would sing at family gatherings, teasing us with the idea that Poppa Dave could’ve possibly been a successful musician if he had wanted to be. This connection between grandfather and squid may seem farfetched, but in the context of this adventurous narrative it makes perfect sense. Frank’s fascination with the giant squid derives from his fascination with his grandfather, and that obsession quickly links to the utter captivation Harvey must have felt when he discovered that squid one cold day in Canada.

Throughout Preparing the Ghost, Frank provides enjoyable factoids and entertaining tangents. In the book’s second part, “The Mere Fabrications of the Distorted Mind,” we learn that American restaurants began introducing squid to menus (using the Italian name—calamari—to make it more appealing to uneasy eaters) because of a price increase and lack of availability of more popular seafood such as cod and flounder. In another section, Frank expands on Poppa Dave’s musical interest to tell us the most popular songs in the years Poppa Dave was born, 1916, and the year he died, 1986. It is in these surprising departures that Frank’s true skill emerges, delighting the reader and deepening the complexity of his subject.

It can’t be overstated how contagious is Frank’s admiration and curiosity of Moses Harvey’s obsession with the giant squid. With each page the reader falls more and more in love with the mystery surrounding that fateful encounter between man and monster, between fact and fiction. The way Frank goes about illustrating the sequence of events leading to that encounter is beautiful. He places wonderfully brilliant if fictional thoughts into Harvey’s head as he walks along the shore. He imagines how Harvey’s wife, Sarah, must have waited for him, wondering if he had eaten lunch. He goes so far as to begin the book by imagining Harvey’s dreams, building the myth of the squid from the very start. All of this successfully builds to the moments when Harvey finally has the squid in his possession, leading to him take the photograph with the squid’s tentacles dangling from his bathtub. Frank also provides explanations as to how and why the squid so quickly disappeared from Harvey’s hands, and expresses empathy for the cephalopod. In a sequence on how we express pain in multiple languages, Frank writes, “In the U.S., we say, Ouch! The giant squid, of course, says nothing, merely lies dying, its color fading.”

Shifting among history, fiction, and memoir, Preparing the Ghost should perhaps be titled Ghosts instead, because Frank’s lyrical, masterfully intertwined storytelling alludes to a multitude of spirits, both within the ocean and on the earth. In this book we get one step closer to understanding the giant squid (it is amazing how so many years after Harvey’s photograph was taken we still know so little about the giant squid, which in turn adds to the luster of deep sea lore) and the storm those obsessed with the kraken must withstand.