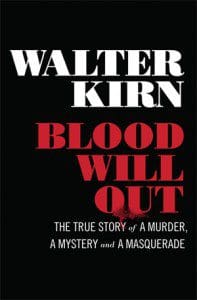 In 1998, author Walter Kirn (Thumbsucker, Up in the Air) agreed to drive a crippled Gordon setter from Montana to New York and deliver the dog to Clark Rockefeller. Kirn’s new memoir, Blood Will Out (Liveright, 272 pages) details his fifteen-year friendship with a man he long thought to be a Rockefeller, but turned out to be a wanted murderer.

After the delivery of the dog, Kirn and Rockefeller maintain a long-distance friendship, with Kirn making one additional visit to the East Coast in 2002. But when Clark kidnaps his own daughter in 2008, Kirn, along with the rest of the world, finds out that the man portraying himself as a Rockefeller was actually Christian Gerhartsreiter, a German immigrant wanted for the 1985 murder of John Sohus in San Marino, California. Wanting to know how he, along with everyone else, was duped by a simple con man, Kirn sits through Gerhartsreiter’s 2013 trial. “The trial was my chance to right all of this. To call off a deal I shouldn’t have agreed to.”


While much of the book is focused on the trial, Kirn already knows many of the facts put on by the prosecution. Rather than reporting on the daily gossip of the case, the trial presents an opportunity for him to look at his own life and figure out how he didn’t recognize anything suspicious during ten years of knowing Clark Rockefeller. As Kirn narrates his story with a tender self-awareness, rehashing the events of the friendship, the signs are there but simply go ignored. Kirn’s introspection also extends to his life as a writer struggling with his family. When we meet him in the book’s opening pages, he’s working on a news story about methamphetamine abuse in Montana (“The photographer with me had covered foreign wars but said that he found Billings after dark scarier than Zimbabwe or Beirut”). Married and expecting his first child, Kirn feels optimistic. Later, when the true identity of his friend is revealed, Kirn shows how much his life has changed since. He’s single, only seeing his children every other weekend. “Men who live alone don’t live originally,” he writes. “We eat at the bar. We file for tax extensions. We call our worried mothers too often.” Though his circumstances have changed drastically, his friendship with Clark, whom he thought was listening to him, remained solid, perhaps offering a theory as to why Kirn blindly trusted him. It’s Kirn’s unabashed self-inspection that really carries the book.

Though Blood Will Out is a book about a 1985 murder and the defendant who spent decades hiding in plain sight, it’s also a story about friendship; an examination of why we choose the friends that we choose, and how it feels to have them let us down. At one point, Kirn believes he’s determined exactly who Gerhartsreiter is, comparing him to literary figures such as the Duke and the Dauphin, Jay Gatsby, Tom Ripley, and Milo Minderbinder. “He’s the villain with a thousand faces, a kind of charming, dark-side cowboy perennially slipping off into the sunset and reappearing at dawn in a new outfit.” But the interior realizations of the author demonstrate that while Gerhartsreiter may be the extreme, everyone is capable of lying, of slightly changing who they are, often for the sake of making friends.

On his 2002 visit to Clark’s house in New Hampshire, Kirn examines a tree in which Clark has said he collects fresh honey from a beehive. But Kirn can’t see the hive. “I strained but saw nothing, then strained harder and saw less. Behind me, I felt the pressure of his enthusiasm but lacked the words to comment on a hive whose shape I could neither see nor clearly pictures.” Rather than questioning his friend, he stays quiet, and continues with his visit. Blood Will Out is a mediation upon how two friends can see things two completely different ways, and how it is often the nature of friendship to stay quiet and move on with the hope we don’t later regret not asking questions.