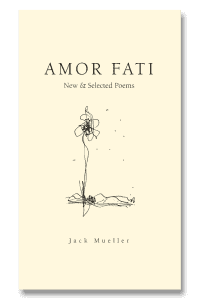 Amor Fati, a thick volume of new and selected poems from Beat affiliate and once San Francisco fixture Jack Mueller, truly lives up to its name (Lithic Press; 177 pages). “Love of fate,” as the title translates, appears in these pages in many forms: as contemplative acceptance, surly fatalism, awed joy. One moment pondering the nature of death, the next exuberantly describing a bird, Mueller vacillates between optimism and resignation as he moves between the registers of philosophical abstraction and concrete observation. Distinctly the work of an older writer, Amor Fati tackles almost exclusively cosmic questions—about mortality, love, and our relationship to language.

While the more lucid, imagistic poems are generally Amor Fati’s most memorable, the majority of the book consists in abstract, existential declaratives. “We live, love, marry, suffer / and more,” one poem reads, while another comprises only the sentence “There is no science / but the science of poetry.” Mueller explores logic and physics, tautology and eroticism, with the tenor of someone who has thought long and hard enough about these subjects to have finally arrived at something true—something like consensus between his various and often inharmonious selves. (“I am, by condition, complex,” he writes, affecting Whitman, “I argue tomorrow and today comes / like a small surprise.”) Even when his subject is moral or linguistic relativism—which is often—Mueller speaks with authority: “I am not myself / nor am I something / other.”

Mueller’s verse is punctuated by his cartoons, doodled in sketchy ink and usually unaccompanied by a caption. There are abstract landscapes, alien flowers, weird circuitries, a fish. While the drawings do not contribute semantically to the text (they are not, literally, illustrations), they enrich the portrait of Mueller as an artist who does his thinking on the page. Additionally, the cartoons work to divide the book into thematically disparate sections. One section discusses coyotes, while another includes several poems set in Guadalajara; a third deals broadly with entropy. Throughout, Mueller’s timbre is characteristically Beat, marked by both contempt for human dysfunction and a Blakeian zeal for the ineffable. “Tic Toc Goddess” nicely exemplifies Mueller’s take on the Beat vernacular:

Nice, kinda kabalistic, a
bowl filled with a buncha numbers.

My kind of wrestle soup, close
to pataphysical. Me, I’m still carving on

paradox poetics, with plural headway, but
without immediate announce.


Last night I got on a rush, wrote 22 short pomes.
Today I’m afraid to look at them.

I don’t know why these fukkin’ ambushes occur,
but they do, & I, the fool, obey.

The “claustrum” may be the key, but
damn if anyone understands consciousness at all.

“Paradox poetics” is a good description of Amor Fati’s contents. Even as “Tic Toc Goddess” purports to describe negative capability, it simultaneously diminishes the poetic project; these “22 short pomes” (the pun pitting the “fruit of labor” against literal fruit) are both miracles of claustral intervention and objects the poet is “afraid to look at.” Likewise, many poems express supreme ambivalence on the subject of death, sometimes resenting it, other times viewing it as acceptable or even desired. Take “Amor Fati,” the book’s eponymous, opening poem, for an example of the latter:

What I can’t change—changes me.
A solar flare opens a small room inside me
And burns it up.

Though without ambition, and with
Best intentions, a full moon
Knocks me off track…

A war distempers me
An overheard remark
Makes it impossible to sleep.

The slow combat of classes in peacetime
Edges me out of the restaurant,
An insect invades my diet.

A poem I didn’t ask for
Writes a year off my life,
A virus stops a hot work cold.

Banks charge me for making money
Off my money. A volcano trashes
My favorite sleeping lake.

A woman I have never seen
Seduces me. What I can’t change
Montages me

Thickens my ear, contradicts my eye
Forces me to make
This reply—small fight

Against a brute, unanswerable tide.
Men are not free—my neighbor is poor
And impoverishes me.

Earth, I volunteer my fate to your position.
I am subject to the dictatorship
Of your yellow dwarf,

A slave making a battle song
To forces greater than myself,
For what I cannot change.

“What I cannot change—changes me” reads like a koan, a mantric acceptance of fate. A few pages later, a stanza ends, “You can only love life so long.” Yet, with each passing poem, the poet’s relationship to death becomes further complicated; we glimpse moments when life is “a bruised glory,” when the poet’s “heart is opened,” when he is unmistakably attached to and infatuated with the world.

While it is not surprising to remember that Amor Fati includes decades-old poems beside new ones, it is impossible to know which are those of a younger man, which of an older. All are intensely preoccupied with death, imminent or distant, fearsome or benevolent. What changes from poem to poem is the ratio of morbidity to vivacity, dysphoria to hope—for each piece contains a quantity of each. The art of living peaceably, Mueller tutors, lies in understanding this central contradiction: “To be alive and dying at the same time.” Near the end of the book, there accumulate moments of near-perfect paradox, when love and fatalism find articulated equilibrium. “Accepting, I reject it all,” is one such moment. Another: “It is late & I’m exhausted. / I’m both serene & furious.”

Perhaps we can treat Amor Fati, then, as the radical mimesis of an older man’s coming-to-terms with his own death. We are privy to the spiritual equivocation, the effort to reconcile consciousness of mortality with the unconscious, inexorable will to live. We see renunciations of autonomy beside proclamations of agency, Zen determinism beside cheeky obstinacy. Even by the end of the last section, when death seems most imminent (and the text itself approaches expiry), Mueller continues to look beyond the limits of his body and the finitude of human understanding to ask big, unanswerable questions, to propose new terms for our human condition, to reach, to wish. To write.

2 thoughts on “What It Means to Be Alive and Dying at the Same Time: Jack Mueller’s ‘Amor Fati’”