This week, VIDA, Women in Literary Arts, released its 2013 count results. Since 2010, the annual count compares the number of women to men published in major and respected national publications; importantly, the count also looks at the distribution of books by female and male authors that are reviewed, as well as the number of female versus male book reviewers.

Equality is ideal, not only for its own sake, but also for the sake of publishing the best journal possible. In every sense, it serves ZYZZYVA as much as any other journal to maintain a balance between male and female voices, both in print and online. Though for the most part we find that in the normal course of planning our issues our content is always nearly balanced, from time to time it takes the gentle guidance of the editorial hand to ensure that’s the case. And gently guide we do—with each issue, blog post, and event, we ask the questions that we feel every journal ought to ask: “Is this balanced, diverse, and compelling? Who is being heard? Who is not? Are we proud to share this with our readers?” 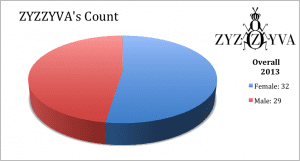 To that end, we are indeed pleased to share how our numbers compare to those of other publications examined by VIDA. We are committed to maintaining and improving this balance this year, and in the years to come.


And to provide further transparency, here are the results of our own in-house audit of our print issues over the last three years (representing the efforts of our current editorial team since January 2011).

Although we published more women authors in 2012 than we did in 2011, the percentage slipped in 2012 mainly due to an imbalance in our Spring issue. While there is bound to be some movement in these numbers from one issue to the next, we’d much prefer to see nothing more disparate than a 60/40 split, and have been, and will continue to be attentive.

In our upcoming 100th issue (due out this April), we’ll celebrate an abundance of formidably talented contemporary women writers with a powerhouse lineup: new essays by Rebecca Solnit, Katie Crouch, and Edie Meidav; fiction by Elizabeth Tallent, Michelle Latiolais, and Erika Recordon; and poetry from Kay Ryan, Valerie Bandura, and Michelle Patton.

In VIDA’s efforts to recognize those publications that value a balance among contributors, we hope they will help bring attention and support to those publishers (including small publishers like ZYZZYVA) who strive for such balance, year after year.