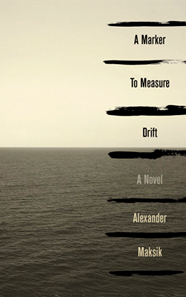 Alexander Maksik’s second novel, A Marker to Measure Drift  (Knopf; 222 pages), boldly repudiates the old chestnut that a writer must write what he or she knows. Jacqueline, Maksik’s protagonist, is a young woman from one of the wealthiest and most powerful families in Liberia— and now a refugee who has fled to the Greek islands in the aftermath of Liberia’s second civil war. As an undocumented immigrant, Jacqueline ekes out a painful existence on Santorini’s tourist-filled beaches. The novel’s opening thrusts us directly into Jacqueline’s narrowed existence—there is no backstory granted us (yet), only the immediacy of Jacqueline’s hunger and desperation following her escape, and the potency of the memory of her mother, which follows Jacqueline everywhere she goes.  As the novel progresses, Maksis carefully lays out pieces of Jacqueline’s history, giving us only the essential. (We discover that Jacqueline is Liberian, for instance, when she tells a curious tourist so; that she was once well-off when she eats a vacationing family’s leftover scraps of food even as the memory of her mother cautions her that “to be elegant, to be graceful, to be beautiful, we must do everything slowly.”)

It seems clear Maksik chose Jacqueline’s name carefully. Like Jackie Kennedy, she, too, is a witness to brutal murder, the survivor left to reassemble her life amid tragedy. Fittingly, Maksik’s touch is light yet searing when it comes to shaping Jacqueline’s narrative. Never resorting to melodramatics or cliché, Maksik grounds her story in clear prose and demonstrates an equally clear handle on Jacqueline’s physicality and emotional state.

Some of the book’s most moving passages center on Jacqueline’s hunger. She is a young woman who is starved, both literally and emotionally, and her state of desperation clashes with her fierce pride. Maksik’s prose is superb in this regard, accreting specific and sharp details so as to provoke a visceral response in the reader. For example, when early on in the novel Jacqueline is walking along a busy street on the island, and something catches her eye:


“There was a large foam cup of ice cream on a ledge outside the window of a jewelry store. For a moment she thought it was part of the display, a prop for the gold chains. Then she saw there was a spoon stuck into it. As if it were hers. As if she ordered it. She moved to the side so that the cup was in front of her, so that she put herself between the street and it. She pretended to consider the gold. She shifted Saifa’s red school pack from her shoulder to her hand, hoping it might look something like the purses she’d seen the women carrying up and down these narrow alleys. It would take one movement—an open palm, a turn of the hips, a sweep of the hand—and then she’d be moving along like the rest of them, eating as she walked.

“She could feel it. Cup. Spoon. The ice cream cold in her mouth. Bits of chocolate.”

Jacqueline does not get to sweep up the forgotten cup, however. A suspicious shopkeeper emerges from a doorway and her pride forces her to smile at him before walking away.

Jacqueline is adamant that she not be pitied as a hangdog refugee, and as such she is resourceful. Though her mother’s memory counsels her to accept strangers’ kindnesses as “God’s will,” Jacqueline works hard to forestall or at least repay any hint of charity from others. Working as a foot and hand masseur on the beach, she grants us a look at the tourists’ mindsets; because of her accent, many of them ask her if she’s Jamaican (on being told she’s from Liberia, a pair of college girls ask, “That’s in Africa, right?”), others congratulate her for “getting out safe” and slip her big tips.

Though A Marker to Measure Drift is filled with secondary characters, the most prominent among them is Jacqueline’s mother—a ghostly memory with whom Jacqueline regularly interacts. There are moments where we’re unsure on which side of reality Jacqueline is living. While sitting on the beach talking to an American tour guide, her mother appears to her, moving about their old home, reciting Bible verses:

“A man’s pride shall bring him low: but honor shall uphold the humble in spirit. Proverbs, her mother said, standing before her wide closet. We were a civilized family. But we were never prideful.

“Jacqueline knew this to be a barefaced lie, but held her tongue.”

This fragmentation of Jacqueline’s self in response to her trauma is as skillfully done as Maksik’s representation of her physical needs.

The rendering of novel’s setting is another fine example of Maksik’s admirable prose (and still more justification for the power of fiction). The evocations of Santorini allow for some beautiful depictions of Jacqueline—both in how she contrasts with the masses of cheerful tourists populating the island, and in how her predicament mirrors the sea surrounding them. Like her, the sea is constantly moving yet seemingly constrained to the beach. Then there’s the significance of the island itself. As Jacqueline learns from overhearing a tourist group, Santorini was the site of devastation centuries ago, when a volcano erupted and wiped out Minoan civilization. They are all witnesses to the lasting evidence of a people destroyed.

By the novel’s conclusion, it’s hard not to believe A Marker to Measure Drift is a laudatory example of what fiction in its purest state strives for—to make urgent and universal such important, if overlooked, stories as Jacqueline’s. Just like Jacqueline when she watches a father about to wash his child in a shower on the beach, the man teasingly counting down before turning on the water, we might not “recognize the numbers, but the cadence was the same.”