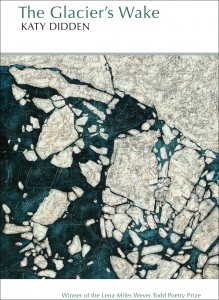 “You’re the kind who stands still / in front of awful things and squints / as though you could see into / the god chambers of every atom in every / drop of water,” writes Didden in “Pleasure Milker.” It’s one of the opening poems in the collection (which won the Lena-Miles Weaver Todd Poetry Prize) and a useful primer to Didden’s poetic mode. At her best, Didden’s poetic voice relates to the reader as a kind of guide and teacher, a fellow traveler who points out the sights and provides the proper scope for what is seen. The poems of The Glacier’s Wake are often set in Arctic regions that few call home, and one of the enduring themes of the work is geologic time and how we might construct a personal, Romantic appreciation of it. “You’re slick / with rain and heat and lift your feet / into the fragile air,” ends “Pleasure Milker,” “But there’s a record here, / under the white veils of the river.”


For a first book, there’s a remarkable evenness to The Glacier’s Wake and a sense that the poems, quite formal and meticulously crafted, have been long smoothed over. It’s quite a feat when you consider what Didden is juggling, combining geologic, historic, or mythic re-telling with scientific insight and lyric awe. Take “String Theory: Pyramus and Thisbe,” which, despite its prohibitively ambitious title, finds its spine in love and loss. The speaker searches for “A place where it’s still not strange for me to rest / against the length of you, say on the dunes of a slow- / paced oasis in the mirror of whose water moves the sky.” Didden’s poems are lush with descriptive imagery to where the interjection of cold, scientific diction can at times be jarring. But it’s a necessary polar plunge for where her poems try to take us.

The shorter poems in the collection seem a bit weaker—without Didden’s slow, guiding voice, the claims they make can be too easy, pat. There are a series of poems where the speaker is a wasp (“The Wasp on Kierkegaard,” “The Wasp on the Golden Section,”) that, rather than seducing with strangeness, seem arbitrary. The exception is “The Wasp on Archangels,” where the juxtaposition makes just enough sense to be arresting.

My favorite poem in the collection is “Before Edison Invented Lights.” Unlike many of her other poems, Didden here keeps a thin, uneven line. “if you stood outside at night,” begins the poem, “at a moonless hour / you could mark your place in the universe / by how you fit / among the field of stars.” Didden’s breaks in the poem are less in the service of a static rhythm and serve more for surprise. The images she supplies swiftly exceed description. They’re physically and visually acute but also unstable, riffing, reaching out toward significance. “between all stars is a dark silence,” she writes, “and the great pull / we only understand as longing, / to which we’re tuned like bells, / over which our eyes draw lines, / between the bright places.” In the end, the poem, in its movement, staccato rhythm, and peppering of bright, explosive images, forms a kind of constellation itself. At bottom, the poem, a sparkling example of Didden’s work, is a gifted elegy for the stars that “to our eyes, have gone out.” Ever the guide, the poet offers a way of seeing them again.