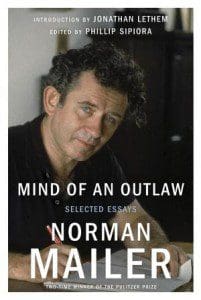 There’s a great moment in Lou Reed’s “Take No Prisoners’’ album in which Reed, after taking aim at the rock critic Establishment of the day, decides to go after the literary elite, too. “I met (Norman) Mailer at a party, and he tries to punch me in the stomach to show me he’s a tough guy,” Reed riffs. “The guy’s pathetic, you know. I said, ‘Come on, man, you’ve got to be kidding. Go write a Bible.’ ”

The publication of two new books on Mailer’s life and legacy serves as a reminder of how far we’ve come from the days in which he appeared to be a central literary figure and of the limits of hagiography.

Mind of An Outlaw (Random House; 656 pages), a collection of selected essays edited by Phillip Sipiora, with an introduction by Jonathan Lethem (perhaps to appeal to the younger demographic; if so, the next edition should include an appreciation from Tao Lin), seemed the more promising, if only because of Mailer’s journalistic verve.


“Superman Comes to the Supermarket,’’ his famed Esquire broadside about Jack Kennedy’s nomination in Los Angeles, does not disappoint: it still holds up as a masterpiece of political New Journalism. Here’s Mailer, in high baroque form:

“So this is the town the Democrats came to, and with their unerring instinct (after being with them a week, one thinks of this party as a crazy, half-rich family loaded with poor cousins, traveling always in Cadillacs and Okie Fords, Lincolns and quarter-horse mules, putting up every night in tents to hear the chamber music of Great Cousin Eleanor invaded by the Texas-twanging steel-stringing geetarists of Bubber Lyndon, carrying its own mean high school principal, Doc Symington, chided for its manners by good Uncle Adlai, told the route of march by Navigator Jack, cut off every six months from the rich will of Uncle Jim Farley, never listening to the mechanic of the caravan, Bald Sam Rayburn, who assures them they’ll all break down unless Cousin Bubber gets the concession on the garage; it’s the Snopes family married to Henry James, with the labor unions thrown in like a Yankee dollar, and yet it’s true, in tranquility one recollects them with affection, their instinct is good, crazy-family good) and this instinct now led the caravan to pick the Biltmore Hotel in downtown Los Angeles for their family get-together for a reunion.’’

Never one to pass up an opportunity to rail against architectural sins, he adds: “The Biltmore is one of the ugliest hotels in the world,’’ before contrasting it with the thriving gay pick-up scene in adjacent Pershing Square.

The rest of the collection does not live up to this standard, alas. Once influential pieces such as “The White Negro’’ now read as windy tracts of pseudo-existential philosophy punctuated by the envious salutes to black sexuality that James Baldwin, among many others, found offensive. If Mailer was indeed a hipster, he was surely one who was trying too hard.

A conversation with Jimmy Carter, while derivative, is amusing these many years later, if only for the section in which Mailer tries to expound his theories about Kierkegaard to the baffled Baptist—the author is always at his best when he’s his own comic figure. But the rest of the collection is disappointing: an homage to Jack Abbott (which mystifyingly fails to include a mention of the prison auteur’s post-parole criminal wrongdoing), some meanderings about Marilyn Monroe, and some not very interesting literary speculation about Hemingway, Henry Miller and D.H. Lawrence. (“Quick Evaluations on the Talent in the Room,’’ his take-down of contemporaries including Bellow, Styron, Salinger and San Francisco’s Herbert Gold is entertaining, apart from the infamously sexist arpeggio about women writers: “I have a terrible confession to make—I have nothing to say about the talented women who write today…I do not seem able to read them. Indeed I doubt if there will be a really exciting woman writer until the first whore becomes a call girl and tells her tale.” Bracing.)

Conspicuous by their omission are Mailer’s Vietnam Day speech at Berkeley, reprinted in The Realist, with its famous taunts to Lyndon Johnson, the inspired satiric sections of Armies of the Night (in which Mailer contrasts his Brooklyn bravado with Robert Lowell’s Brahmin hauteur), and the understated journalism of The Executioner’s Song. (The latter two are probably missing because the editors didn’t want to include sections from Mailer’s still available and well known nonfiction novels.) The title essay, on the other hand, which deals with the censorship travails Mailer had over the publication of The Deer Park and his own cannabis-tinged post-Naked and the Dead creative crisis, provides a fascinating glimpse into the literary politics of the day, even as it presages the central questions he wrestled with, to varying degrees of success, for the rest of his career. 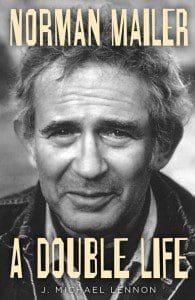 But the Mailer industry cranks along. At 947 pages, J. Michael Lennon’s Norman Mailer: A Double Life (Simon & Schuster) certainly tells you (almost) everything you might want to know about the author’s many marriages, infidelities, and literary feuds, including his racist taunts at New York Times book critic Michiko Kakutani, who had the temerity to point out that most of his later novels sucked. Reliable sources say that Peter Manso’s 1987 oral biography was more entertaining, and had the additional merit of pissing off the subject.

Lennon, the founder of the Mailer Society (Sipiora is the editor of the Mailer Review), does a fair job of being evenhanded. But some of the details are telling. A letter from Mailer’s mother, Fanny, when he was a Harvard undergraduate, speaks for itself:

“How is the writing coming along, honey? Put all the feeling you possess into it and it has to be good. When you were a tiny infant every time I nursed you, I would whisper in your ear, ‘Please God, make him a great man today.’ ”

Always torn between his public and the private selves, Mailer’s “double lives’’ embraced the contradictions of the “American century.’’ He took his shot at the Bitch Goddess of literary success early, and found a formidable second wind in mid-career. If his latter work, and persona, seemed like an impersonation of Sterling Hayden in “The Long Goodbye,’’ so be it. Mother doesn’t always know best.