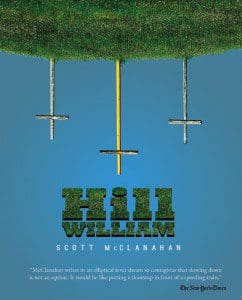 Scott McClanahan’s new novel, Hill William (Tyrant Books, 162 pages), is a slim, dark but funny coming-of-age story set in West Virginia. The narrator and protagonist, Scott, is an ill-adapted adult trying to keep a lid on his issues for the sake of a pretty girlfriend. When things between them get rough, he can’t help cursing, rendered inarticulate, bashing in his own face in an attempt to relieve inner turmoil. When his girlfriend asks him to mow the lawn, he refuses. When she threatens to do it herself, he goes out to throw the lawnmower over a hill, but when even that end is frustrated, he settles for throwing a Mountain Dew on the ground. “You make me want to hit myself in the face, but I’m not hitting myself in the face, and this shows I’m doing better,” he says. “I was the winner. I was better now. There was Mountain Dew everywhere.”

Hill William can take some getting used to. After the first of many short chapters made up of action-driven vignettes, the book takes a long look back, toward Scott’s childhood and adolescence. There’s a brand of violence here similar to what one would encounter in a Dennis Cooper novel. At the center of Hill William is the young Scott’s relationship to a slightly older boy named Derrick, and it’s the twisted adventures and sexual education of the pair that makes up much of the first half of the novel. Initially, it’s difficult not to see the pair as relatives to Solomon and Tummler, the toothy, cat-shooting boys from Harmony Korine’s film Gummo.


Cooper and Korine are some possibly obvious influences, but there are other currents running through Hill William. It’s an unruly, in-your-face brand of storytelling that McClanahan employs, but once you get past some of the shock tactics, the novel can read deceptively sentimental. Though the story is set in Rainelle, West Virginia, amid the roar of chainsaws steadily logging away the mountain, McClanahan isn’t after the sort of farm-boy Romanticism that sneaks into the stories of Breece D’J Pancake. He does, though, create a sort of mixed ode to the place—an ode that, up until the end, seems devoid of any real connection to the disappearing land and is more about the pleasantly fucked-up community of what is, for better or for worse, home.

The most distinctive aspect of McClanahan’s voice is its humor. That humor doesn’t redeem the violence, but it grounds it, and makes the book palatable in a way that Cooper—for all his mastery of art and craft—simply isn’t. McClanahan writes short, adjective-avoidant sentences. They aren’t so much terse in the ultra-masculine, Hemingway style as cleverly pithy. When McClanahan uses them for comedy, he will make you laugh hard. One particular episode has Scott, beginning to notice girls, dragging his height-adjustable basketball hoop over to a wooden fence as a trio of giggling teens watches: “An 8 foot tall basketball hoop and a wooden fence meant only one thing: impressing girls.” Scott tries to knock the ball off the backboard, jump off the fence, do a 360 spin and slam-dunk into a set of pull-ups from the rim. Obviously, that’s not quite what happens. But the embarrassing fiasco you might be imagining won’t be anywhere as good as what McClanahan perfectly renders.

The end of Hill William brings us back to the present, to the grown Scott refusing to go see a therapist (“Talk to someone who wears turquoise jewelry”). With his life story nearly all told, his self-harming state is a lot easier to understand. The magic trick of McClanahan’s novel is that you end up rooting, somehow, for the big lug.