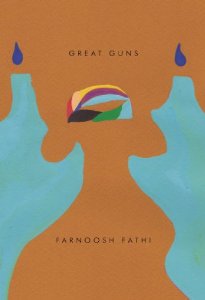 Great Guns (Canarium Books, 73 pages), the first poetry collection from California native Farnoosh Fathi, is a bold example of the sonic power of verse, and its simultaneous capacity for creating images with philosophical questions at their core.

Nature is the basis for many of the poems in Fathi’s collection. She amplifies the natural world, populating her poems with snails, butterflies, and birds, animals so small that they have different color registries, different views of the world. By changing the perspective with which the world is viewed, she’s instructing the reader to examine how large and beautiful the world is, beyond what we are used to seeing.


She also juxtaposes the natural world with our lack of understanding of theoretical ideas. In “Worm Rally,” the banal act of watching a worm crawl is pondered by two gardeners with different opinions. “What pleasure in looking,/even at the worm, especially at the living worm one said/ – as long as we know the worm’s whys.” Yet we don’t know the why of the worm, so Fathi asks whether it might be better to opt for contemplating the worm itself, “This pleasure said / another gardener, is analogous to the pleasure / derived from looking at a picture of the worm, that is if we / can aim to understand why that was the best / way to capture the worm: lacquered or unflattered by proof.” The questions asked in her poems demonstrate a keen awareness that in nature, as well as in society, finding the right answer isn’t easy.

“Worm Rally” is representative of the humor—the playfulness with the words themselves—underlying the collection. But Fathi also produces stinging images, ones layered with introspection, encouraging the reader to stop and wonder. (In “Sympathy,” she writes, “If there’s been a mistake it may be / in assuming less vulnerability / as one fills the vase.”) The harshest of the collection’s lines are often the moments when the speakers are brooding about their futures, such as in  “Honey/Manila Portfolio” when she writes, “This is not a book. Otherwise, by now / We would love each other.”

The strongest element of Fathi’s collection, though, is the highly technical construction of her poems that complements the beauty of her language. Whether a sonnet or a prose poem, each line is carefully chosen to reflect the lyricism of verse, with each line resonating with the one preceding it. In “Sparrow,” she writes, “Because you will so easily disappear / I think of you as infinitely near”; and in “Banana”: “If there is a nose, it is soft-shaped / In the business of still young foes.” Fathi’s voice is so strong that Great Guns deserves to be read aloud, lest we risk missing her strength for lyricism amid her talent for biting humor and nuanced insight.