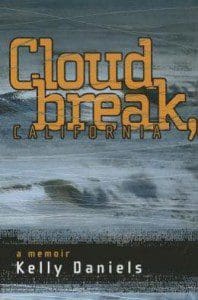 “The pure products of America go crazy,’’ William Carlos Williams memorably wrote, and from Aurora to the weird kid lounging at the register of the local 7-Eleven, we see the proof of his perception all around us. In ‘70s Southern California, Kelly Daniels grew up amid such strangeness as the son of a drug-dealing, surfer-bum dad (who was ultimately convicted of killing a drug-dealing cousin) and a well-intentioned and loving mom, who signed up with a cult called the Church of the Living.

Although he found temporary refuge with his wealthy grandparents, Daniels grew up, understandably, confused and angry. With admirable tact and dispassion, he has channeled that turmoil into a memoir, Cloudbreak, California (228 pages; Owl Canyon Press). Warned by his father that the cousin’s son might someday seek revenge, Corleone-style, upon him, Daniels contemplates his fate: “A boy, my age, a hidden enemy, was growing up alongside me, plotting revenge.’’


Putting on a hounds-tooth cap like the one worn by Sherlock Holmes, he roams the streets, hoping to avoid, but half-inviting, confrontations: “I slipped out of the house without Mom noticing, walked away from home and into the neighborhood west of Orange Street to the part of town I was supposed to avoid,’’ he writes. “In a quiet park of cracked basketball courts and grass covered in dandelions, I studied the graffiti etched across the handball court, as if trying to crack a code. The dozen cholos standing around a low-rider in the parking lot ignored me. […] In a flash, I ducked into an alley and, halfway to the end, cut up between two houses and back onto another street, shaking my invisible stalker. Trouble would find me one day, and when it did, I was going to have to be ready.’’

The author’s adolescent Raymond Chandler fantasy morphs into more adult forms of discontent. Ten years after his father jumps bail (he subsequently returns to face trial), Daniels breaks up with his girlfriend for no good reason and heads down to Central America (with a pit stop in San Francisco first) as he tries to outrun his demons.

But the expatriate game is dispiriting, and he can’t make a go of things, despite a romantic interlude, taking odd jobs, camping out, and, at one point, staying for free at a bat-infested “government resort’’ in El Salvador.

Inevitably, Daniels’ Odyssean journey ends with a reconciliation of sorts with his father, who manages an early release from Soledad with the help of a smart lawyer. The two try surfing together, though Kelly remains no match for his dad’s aquatic prowess. Eventually, he drifts into a restaurant job at the ritzy Ritz Carlton, treading water until he can decide how best to meet his fate.

But something clicks, somehow, perhaps through the partial reconciliation. Daniels, who is now a professor of creative writing at Augustana College, gets accepted in graduate school, on his way to a better life. It’s certainly a vast departure from his stint at the lonely Salvadoran “resort”:

“After a dinner of avocado, tomato, bread, and hot sauce, I bedded down. It felt strange to be alone in a place meant for hundreds. I imagined ghosts in the other cots, benign ones, hanging around because they had nowhere to go, glad for my company. This reminded me of my father’s notion of the afterlife. We, as disembodied and eternal souls, hung around an enormous casting studio, waiting to audition for roles here on Earth. In this view of things, the stories of our lives had already been written, if not rehearsed, and we only forgot what was coming by some magic initiated when soul entered flesh.”

Kelly Daniels has written the story of his life—so far—with courage and conviction. As Joyce wrote in a different, though related, context: “I bleed by the black stream/For my torn bough.” The pure products of America may yet survive the roots of their raising.