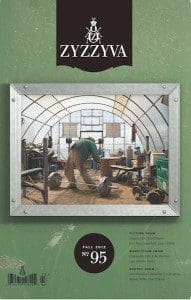 It looks like the Fall 2012 ZYZZYVA (No. 95) has some sort of magic working for it. Earlier this year, we were thrilled to learn that a story from that issue, Karl Taro Greenfeld’s “Horned Men,” would be included in the 2013 Best American Short Stories. And today, we received a call informing us that Dagoberto Gilb’s nonfiction piece from the same issue, “A Little Bit of Fun Before He Died,” will be included in the 2013 Best American Essays.

We offer our warmest congratulations to Dagoberto Gilb and Karl Taro Greenfeld. And if you don’t have the Fall 2012 issue already and want to know what all the fuss is about, you can order a copy here. (Just scroll a little bit down on the page.)