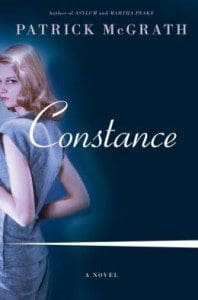 Patrick McGrath’s new novel, Constance (Bloomsbury, 229 pages), is a chilling tale of family destruction set against the backdrop of a crumbling New York City. Set in the 1960s, Constance follows the marriage of two people as long-hidden secrets threaten to break up them apart.

Sidney Klein, a single father and poetry professor, meets Constance Schuyler at a book party and is immediately swept up by the much younger woman’s “air of angry untouchablility.” During their courtship, he learns she was solely raised (along with her younger sister, Iris) by her father on the banks of the Hudson River. After Sidney and Constance marry, Iris moves to New York where she falls for a suave piano player named Eddie Castrol. Life appears to be moving along for Sidney and Constance, while Iris’s unpredictable life orbits on the outskirts of their marriage.


But on a trip to visit her childhood home, Constance learns that her father isn’t actually her father, sparking a rage within her. The truth about Constance’s father leads to further family secrets. “Now the crypt had been opened but the truth hadn’t set me free,” Constance says, “the reverse.” She decides to punish the people who helped keep the secret of her father from her, and in doing so damages her marriage, her relationship to Iris, and her feelings toward the man she once thought of as her father.

Switching between Sidney and Constance, and using the first person point of view, McGrath tells the story from both sides of the conflict, leaving the door open to interpretation about the whole mess. Sidney, for his part, is just trying to keep his family together: “I’m with Goethe on the correct response to a failing marriage. Resignation. The preservation of order at all costs. Stoic nobility of spirit.” But as Constance’s vengeance continues to intrude into Sidney’s life, he’s left wondering whether the marriage is past the point of saving.

The downfall of Sidney and Constance is portrayed against the degradation of mid-‘60s New York. Irked over the destruction of the old Penn Station, Sidney begins a new book about the collapse surrounding him. “The transformation of Manhattan into a so-called modern city was to me a bad joke. New York was breaking down. I catalogued its death throes on a daily basis.” Many of the scenes in the novel take place in rundown buildings and in Constance’s decrepit childhood home; ruin is just steps away, growing worse by the day, and in that way mirroring the characters’ decline. “It would be a damn sight easier, I thought, to explain what was happening to New York City,” Sidney acutely notes toward the end, “than to figure out what was going on in my wife’s psyche.”

McGrath, who has made his mark as a dark, Gothic writer (Asylum, Trauma, Spider), offers the reader one haunting surprise after another. The lies and deceptions are plentiful in Constance. The only question is whether any of the protagonists, who are simply trying to keep their relationships afloat, will survive intact.