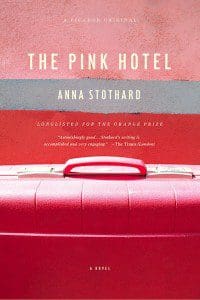 In her second novel, The Pink Hotel (Picador Original, 280 pages), just published in the United States, Anna Stothard tells the tale of a 17-year-old girl’s attempts find out more about the life and death of her party-girl mother, Lily, while on an extended trip to Los Angeles.

The book opens on the nameless narrator at the wild, drug-filled party that is meant to be a memorial for Lily, exploring her mother’s room in the Venice Beach hotel she owned. Having been abandoned at the age of three, the narrator barely remembers her mother and the other people at the memorial have no idea who she is. With the party in full swing, the narrator walks out of there carrying a pink suitcase filled with some of Lily’s clothes, make up, and letters.

The novel follows the teen girl as she wanders around Los Angeles dressed in Lily’s clothes and trying to piece together her mother’s life. She connects more and more details about her mother’s failed marriages, her changes in careers from a waitress to a nurse to a hotel manager and owner, and becomes entangled with a paparazzo named David, who she is convinced was involved with Lily in some way.


Stothard, a British author, makes L.A. come alive, describing the sweltering heat, the complicated public transportation, and even the bars and nightlife of the city. She does not shy away from the seedier side of L.A.—the excessive use of drugs, self-harm or the destructive draw of celebrity culture. Some of her characters are among the most beaten and downtrodden people in the city, and Strothard brings their gritty reality to life.

The color red plays an important role in the story as well. On almost every page, a shade of red or pink is seen, whether in the form of blood, the suitcase the narrator takes, the pink hotel, a dress of Lily’s, or even the red that appears over and over in the love letters stashed in the suitcase. Strothard’s use of red provokes a sense of urgency in reading her incredibly short chapters, pushing the reader onward. (After this bombardment of red imagery, the narrator’s revelation in the middle of the book that green is her favorite color is almost like a cool breath of air.)

While Stothard is able to make L.A. and her secondary characters vibrant, her unnamed protagonist (who blatantly lies to everyone she encounters, making her highly unreliable) at times falls flat. At times, when Stothard seems to be trying to convey the narrator as tough but engaging, she ends up coming across as mostly cold and rational. And despite everything she experiences journeying through L.A., and she experiences a lot, she doesn’t seem to change or develop. The novel ends almost exactly as it began, with her wandering a now empty pink hotel, wondering about her mother.

Still, Stothard’s work is thoughtful and engaging, and she makes L.A. and its many denizens glow on the page like neon lights. That and novel’s compelling plot make The Pink Hotel a satisfying read.