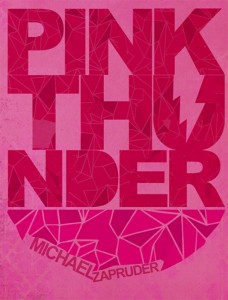 Michael Zapruder’s recent album/poetry anthology Pink Thunder (Black Ocean, 64 pages, 22 audio tracks) combines the poetry of twenty-three poets—including Gillian Conoley, Dorothea Lasky, Mary Ruefle, and D.A. Powell—with Zapruder’s music to create songs that do not alter the original form of the poems. We talked with Zapruder via email about the process of putting poems to music, and collecting them for an album.

ZYZZYVA: Pink Thunder is an ambitious experiment mixing poetry with music. Can you explain how you came up with the idea for this record?

Also, I LOVE these poets, these poems, and the fundamental effort in which these works are engaged. These poems are trying to discover and express truths that really feel like truths to me. These poems say things like: “Then something strange happened. / His giant bald head rose into the window frame followed / by his one green eye, one blue eye, then his red / veined nose and finally his beard fuzzed mouth / which sang out in a clear human voice / I have been afraid of ever since.” That’s from the poem “Florida” by Travis Nichols. Or like: “and cold enough to trouble / the ghost in you still riding your bike / under pink hi fidelity thunder” from “Twenty Poems for Noelle” by my brother Matthew Zapruder.

I’ve always tried to make songs that feel like those words. I wondered what would happen if I just used the words themselves.

Z: How would you describe the selection process for the twenty-three poems on the record?

MZ: It was impulsive and free. Since this project is fundamentally an experiment in how to make new kinds of songs, I wrote the Pink Thunder pieces using basically the same process I use to write songs. I didn’t work the way I do when I compose instrumental music, for example.


I printed out poems that seemed to ring some faraway bell, and I started singing the poem and harmonizing those melodies with basic 3- or 4-note chords. My self-imposed law was that I would never change a poem at all; and that the music and melody would replace the silence and speech in the poem, but would do nothing structural beyond that.

Z: Was it always your plan to have a book accompany the record, or did that idea come later in the process?

MZ: My first idea was actually to make a free-verse song from each poet’s poem, then to turn the musical ideas that resulted from that into a standard verse-chorus-verse type of song without words and ask the poet to write a song lyric to fit that music. The idea was to release these pairs of songs as Side A and Side B of a set of 7-inch singles.

Later, once I knew the basic shape and scope of the project—being a record of free-verse songs made from unchanged poems—I definitely wanted it to be released in book form. From early on, that was the vision.

Not only do I love books, but music is also facing challenges in terms of release formats. Vinyl is quite nice, but it’s also a relatively small group of people who really buy vinyl. Everyone has books in their houses.

Z: The book that accompanies the record features the poems as illustrated by Arrington de Dionyso. How to did you come up with the idea to illustrate the book?

MZ: Originally I didn’t like the idea. Some friends I was working with on ideas for the book suggested that the poems should be illustrated rather than printed. Their idea was that the sense of Pink Thunder as a “poetry anthology” would be confusing and would ultimately kind of point people in the wrong direction. They understood before I did that the project is at its heart more of a music project than anything else—it is a project that uses the excellence of poems as a method and a gateway to new kinds of songs. Illustrating the poems not only makes for a more beautiful book, but also has the effect of gently pushing the focus back to the music.

Also, there is a nice parallel between the actual illustrations and the way Pink Thunder’s music kind of ends up illustrating the poems, giving them color and a specificity of shape and line that the usual poetry reading (wonderfully) leaves unspecified.

MZ: No, actually most of the poets had no idea I was working on their poems at all. I wanted the process to be blind.

I tried to be as true to the poems as I could, but when it got to the level of particular phrases, the needs of the song started to come into play a bit more. Any decent songwriter knows that the words in a song, much more than in a poem I suspect, often need to work together in such a way that they don’t call attention to themselves, especially sonically. They need to sound easy and natural in the sense that they are not shoehorned into the music. They are not controlled by ideas; they have to yield in some way to sound as well.

You might say that it’s very good if the music seems like the natural consequence of the words, whether in contrast or in a seamless combination. To make the words of a song overly intellectual, rule-based, externally determined and so on may break the particular and delicate sense that the combination of a group of words and some music make in a song. In a sense, with a song, the whole has to be smaller that the sum of its parts. That’s part of the paradox of songwriting.

Sensitivity to song was my other law. I couldn’t change the poems at all, but the resulting combination of words and music absolutely had to work like a song. So where it was necessary (and sometimes just from repeated performances of the song without consulting the poem), certain moments drifted more “songward” than the precise poem might have indicated.

Z: Your introduction features a poignant passage: “Nothing can equal silence as a background for communication. Silence is in the full spectrum. Its power lies in its potential, which is infinite. Within that silence, these poets can achieve the ultimate, most accurate communication.” Taking away the silence from these poems, did you fear that the poems themselves wouldn’t achieve their full potential for interpretation when set to music?

MZ: YES! Absolutely. I think something is lost when a poem—especially fully realized, excellent poems like these—is deprived of its silence. There is a reduction in potential and an increase in specificity somehow. The colors and textures of music too readily associate themselves with feelings, which then provide a more identifiable context or background for the poem than it originally had.

On the other hand, what the poem loses in potential meaning, it gains in intensity of specific, and especially immediate meaning. This is not necessarily a good thing for the poem, that it is more “three-dimensional” somehow when people first hear it. But it does seem to be one of the effects of the kind of poem-songs that Pink Thunder presents.

I’d also say again that, although I didn’t quite know it consciously at the beginning, Pink Thunder is fundamentally about songs: how songs can be structured but most importantly what songs can be about and what they can be for as works of art. In that sense, poetry’s loss (in the sense of the loss of silence) is song’s gain.

Z: You rode Wave Books Poetry Bus, a bus of poets that toured the country giving readings from Charlotte to New Orleans. Three of the poems selected for the album were written on that bus. Were you present for the composition of these poems, and did that help with the composition of the music?

MZ: I was on the bus when Sierra Nelson’s “Last Words” was written, but I wasn’t there when “Pennsylvania” and “Brother Poem No. 1” were. Those were emailed to me. But being on the bus while they were written didn’t really have any effect on the compositions. Although I did start writing “Last Words” on the bus, and it turned out to be one of the more ambitious and oddly wonderful formal discoveries on the record for me. Certainly being on the bus while I staked out the main foundation of the piece had some effect. Maybe all that shaking from bouncing down the highway prevented me from reaching a certain level of rational coherence, which in turn caused me to write a very irrational, but for that all the more pleasing, song.

Z: The Poetry Bus sounds like it was concerned with building a strong sense of community among poets. Do you think this communal feeling is represented on your album as well?

MZ: I hope so. The poems themselves seem to express a very general consensus (of sorts) about how it feels to live, what questions are important, and how they should be approached, and things like that. Much as I’d like to believe otherwise, though, as an artist I am still a visitor from a different tribe, and so my contribution may be as an admirer and as a fellow member of the larger community of artists in general. There doesn’t seem to be a whole lot of that going on at much of a visible level out there, but it’s a real force in art below the surface, definitely.

What pleases me the most at this point, now that the project is done and is out there in the world, is the rather unbelievable idea that I may be able to offer these poets, and the presses that publish them, some greater exposure or a different “way in” to their work. I admire these artists so much. Many have accomplished so much both artistically and professionally that it’s all I can do to consider myself their peer. The idea that I can help them, and help a larger audience discover poetry, is an idea of community, one in which everyone—artists, readers, listeners—is connected. This has definitely become the most fulfilling thing about the project for me now.

One thought on “Finding the Right Note for Admired Works of Poetry: Q&A with Michael Zapruder”