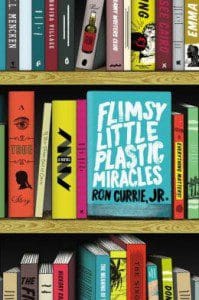 Ron Currie Jr.’s new novel, Flimsy Little Plastic Miracles (Viking, 352 pages), begins with an epigraph from the movie Rocky: “women weaken legs.” Currie’s aim is to entertain, but hidden beneath his comedy about a man who cannot have the woman he loves is a heart-wrenching tale of a narrator who loses control of his life in unimaginable ways.

The narrator, a writer who happens to be named Ron Currie, Jr., has been obsessed with a woman named Emma since eighth grade. She broke his heart as a teenager, but following her divorce the pair begins a new relationship. When a fire destroys Emma’s house, and the manuscript to Ron’s overdue book with it, she decides she needs some time alone. Ron escapes to an unnamed Caribbean island to give her space. On the island, he reflects upon his relationship with Emma and the death of his father, attempting to write a book about it all while drinking himself into a stupor and fighting with the local men. Emma eventually joins him on the island, but Ron’s actions cause her to leave him for good once more, so Ron tries to kill himself. Following the attempt, which fails but leaves him declared dead, the narrator falls deeper into exile, not knowing that monumental events are occurring in the world he used to inhabit.


The relationship with Emma is the main catalyst behind all of the narrator’s decisions. Yet it becomes apparent early in the novel that the relationship is doomed to fail. Ron points out how “no one could every really have her” and says, “with Emma, her trademark is the distance she creates.” Doomed or not, Ron will continue pursuing her as long as he lives. “We all tried,” he explains about the men who have loved Emma, “and tried again, steering ship after ship into the rocks, and if you asked us to explain why, we’d be unable to give you an answer, except maybe this one: because we knew, deep down, that we would fail.”

The story’s most curious aspect is its brief asides into Ray Kurzweil’s theories of the Singularity and artificial intelligence. Speaking factually rather than from fear, Ron tells us that computers will eventually have a mind of their own, and humans have basically always been machines. Ron’s thoughts on Singularity build as the novel progresses, and though the theory seems oddly placed next to his examinations of his relationships with Emma and his father, the author cleverly uses it to build to a heartbreaking passage that pulls together all of the pieces of his narrative. Loaded with both laughter and pain as its narrator ruminates on failed love and death—both real and presumed—Flimsy Little Plastic Miracles is the story of a person coming to terms with both his mortality and the inevitable decline of a relationship.