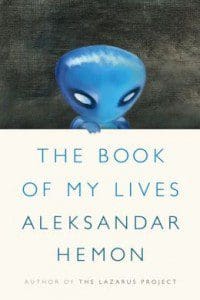 In the first of the linked essays in Aleksandar Hemon’s new book, he begins by remembering how his sister’s birth changed his childhood; how life would always thereafter be divided between before and after her arrival, how nothing would ever be the way it used to be. And then he reminds us, “But nothing has ever been—nor will it ever be—the way it used to be.”

It’s a fitting admonition for the fraught work of memoir writing. Memory, of course, betrays us incessantly, and the creative impulse of the fiction writer is somewhat at odds with the rigors of telling the non-fiction tale of one’s own biography. In The Book of My Lives (Farrar, Strauss & Giroux, 214 pages) Hemon collects fifteen essays about his life, all but one of which has been previously published. In gathering them, a nuanced picture of Hemon’s life emerges, yet it is not the singular, master narrative imposed by the standard memoir format.

The hybrid conception of The Book of My Lives places it neatly at the nexus of a recent surge of creativity and interest in the essay, and a protracted period of interest in the personal memoir. The force of Hemon’s writing is undeniable, and several of these pieces are exceptional; yet the collection is at times ungainly, with instances of repetition that give it a restless quality, a sense, if read straight through, of pacing in concentric circles around the book’s core subjects. This is not entirely for the bad: it’s interesting to see Hemon working and re-working his material, approaching the material of his experience from varying angles (much as he’s done in his fiction), and seeking narrative arcs in that material. This may be an unintended consequence of grouping pieces which were written separately and as stand-alone essays, but the effect is also an honest message about how we tell ourselves the stories of ourselves, revising and reflecting as we go along.


In “The Lives of Others,” the first essay, Hemon examines his own shifting sense of identity, and deftly parses the strange and complex metaphysics of immigrant life: the difficulties of fixing identity in a strange land, the essential importance of place to the secure identity of self. These are complex forces at work in all our lives, but forces which may remain blissfully unexamined for those of us never forced to start over in a new land. The siege of Sarajevo in 1992 eventually forced Hemon and his family to leave their native city for good: at twenty-eight, Hemon made a permanent home in Chicago (where he had originally intended to visit for just a few months), while his parents fled to Canada. Hemon writes with humor and profound compassion of the difficulties his parents face in acclimating to life in Canada, and ponders the act of narrating the self into being, into continued existence amid the ongoing existential crisis of exile: “The displaced person strives for narrative stability—here is my story!—by way of systemic nostalgia. My parents ceaselessly and favorably compared themselves with Canadians precisely because they felt inferior and ontologically shaky.” Hemon’s discussion of self and other, us and them, falters only when he drifts momentarily into bitterly sarcastic political cant (“And then the they flew in on September 11, 2001, and now they are everywhere, including the White House, by way of a falsified birth certificate.”) Though Hemon’s scorn is understandable, the sentiment as expressed here and in a few other such moments feels simplistic and familiar—not at all on the level of the rest of the work.

Though the historical backdrop to Hemon’s youth and young adulthood is political turmoil and upheaval, much of the material in his essays concerns nearly universal subjects: growing up, searching for identity as a man and as a writer, family dynamics, soccer, and chess. When, in “Sound and Vision,” a family vacation goes disastrously wrong and they find themselves stranded, without funds, near an airport in Italy, Hemon’s mother improvises a pleasant evening. Hemon cherishes the memory, recognizing, as we do, its significance: “In the middle of a catastrophe, the Hemons managed to scrounge up some makeshift joy.” Several of the essays proceed by way of first recalling how Hemon perceived circumstances at a given time, and then the shift that makes them significant to him now. Hemon’s tender homage to borscht in “Family Dining,” for example, is both uniquely an immigrant’s tale (to which many from Eastern Europe and Mitteleuropa may relate), and a familiar tale of growing up and coming to appreciate the traditions that bind a family together. Hemon’s attitude toward his younger self (or selves) is wry, drily amused, skeptical, but also patient, tolerant. His longing for the Sarajevo of his past is palpable; the loss that his family suffered through the siege of that city and the pain of their life in exile is vivid and affecting. His recollections open up a world unfamiliar to many Americans, and make Sarajevo a vividly complex and compelling place.

Much of The Book of My Lives revolves around either Hemon’s life in Sarajevo, or his experiences of emigration. But those who read “The Aquarium” when it first appeared in the New Yorker could perhaps not help but feel that essay’s presence hovering over all. It is the grim and agonizing center of this collection, though it is, wisely, the final piece in the book. “The Aquarium” is the wrenching story of Hemon’s baby daughter’s fatal illness. To say that nothing will ever be as it used to be after a child’s death is to say far too little of the impact such an immeasurable loss must have on a parent, on his sense of what the future might be. But Hemon is careful to show his experience is not, as hackneyed cliché would have it, beyond language; it is, instead, a loss that requires an almost unbearably precise language: a medical and metaphysical language that is unflinching in the face of catastrophe.

As Hemon’s elder daughter “furiously and endlessly unfurl[s]” tales of her new imaginary friend amid her younger sister’s cancer treatment, Hemon observes, “the need to tell stories is deeply embedded in our minds, and inseparably entangled with the mechanisms that generate and absorb language. Narrative imagination—and therefore fiction—is a basic evolutional tool of survival. We process the world by telling stories and produce human knowledge through our engagement with imagined selves.” Though “The Aquarium” stands rather starkly apart from the other pieces for the sheer force of its emotional immediacy, it also dwells on some of the same threads of thought.

Among these threads, an interest in “the mechanisms that generate and absorb language” may be especially interesting to some readers, as Hemon’s facility with English has been the source of much admiration. Hemon’s illuminating use of the English language suggests something rare, and something more than mere fluency. His styling has the immigrant’s studied hyper-awareness of how the language works, and, at times, an inflected cadence that is beautifully unusual. Comparisons to Nabokov and Conrad seem irresistible to many reviewers of Hemon’s work, as these authors, too, were immigrants who transitioned to writing in English as adults. In a sense, this urge to compare is understandable: we may well marvel that Hemon could so successfully manage to begin writing in English in his late twenties, and he is forthright in his admiration for Conrad. The comparisons do not extend far, however, as Hemon does not seem to take after Conrad, in particular, and comparisons to Nabokov (beyond an interest in nostalgia and exile) are also thin. Such comparisons too often diminish the work of this exceptional contemporary writer while failing to illuminate much about his work.

One of the aspects that makes a successful essay an intensely rewarding reading experience is the thrill of dissonance between the modest expectations set by its diminutive scale, and the depth and breadth it achieves. So it is with several of the short pieces collected here, and with the impact of the collection as a whole. Hemon examines the ordinary and profound truths of family life and shines an inquiring light on his own interior life, all amid political upheaval and exceptional historical circumstances. Readers of Hemon’s fiction may find some of the terrain covered here familiar in its fundamentals, echoing material found in his stories and novels. The thrill of discovery, then, is in smaller moments, a continuation and deepening of what we’ve come to admire in this author’s writing.

The Book of My Lives can be read, in part, as an elegant exploration of the personal essay. Hemon wields the form’s familiar devices with skill. He uses section breaks to pause and approach the subject from a different angle, or takes an apparently circuitous path, only to arrive suddenly at a clearing where the profound connection between the overt subject matter and the subtext is made elegantly clear. So, for example, soccer and a meditation on spirituality (in “If God Existed, He’d Be a Solid Midfielder”), or the landscape of a city and one’s own interior life and “personal infrastructure” (in “Lives of a Flaneur”), or chess, writing, and the unmitigated pain of life as an immigrant (in “Grandmasters”). Hemon may consider himself a fiction writer first and foremost, but his nonfiction writing inherently celebrates the possibilities of the essay and its potency and flexibility as a form.

The time is right for such a study. As James Wood noted in the New Yorker, “At present, the American magazine essay, both the long feature piece and the critical essay, is flourishing, in unlikely circumstances.” We’ve recently seen excellent collections from Geoff Dyer and John Jeremiah Sullivan, among others. These varied collections find exuberant possibilities in the subjects the form can address, and how. A point of difference, however, is that Hemon’s essays are all personal ones—they take Hemon’s experiences as their sole subject matter, yet they are rigorously intellectual all the same. History and place and politics are major concerns here, but only, really, as they relate to Hemon’s life. All of which is fine, of course: many of the experiences are significant by any standards. Moreover, the raw material of experience is filtered through Hemon’s wonderfully searching critical apparatus, and rendered in wise and muscular prose. Yet strung together, even in something like chronological order, these essays make for an unwieldy memoir. These are pieces crafted to stand alone, some more enduring than others. Now, collected in this memorable volume, they still stand as distinct aspects of a vista, each an integral but independent part of the scene—perhaps a fitting metaphor for the imperfect narrative bent of memory itself.