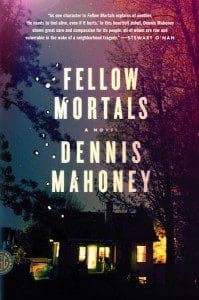 On the first page of Dennis Mahoney’s first novel, Fellow Mortals (Farrar, Straus and Giroux, 277 pages), a fire burns down two houses and damages two more on Arcadia Street. It’s pretty much all downhill from there for the characters. As their lives creep along in the aftermath of that tragedy, Mahoney’s characters show us how a single event can galvanize a group of people yet destroy them at the same time.

Infelicitous mailman Henry Cooper starts the blaze on Arcadia Street while trying to light a cigar on his route. The fire demolishes the houses of Nan and Joan Finn and the Bailey couple, killing Laura Bailey. The houses of the Kane and Carmichael families are also partially damaged. Henry can’t forgive himself for harming the lives of others, so he repeatedly searches for ways to help each family. The Finns, who don’t blame Henry for the fire, take up residence in his guest room. A mourning Sam Bailey allows Henry to clear logs away from the forest land he purchased behind his property. The Carmichaels cause Henry the most trouble. Peg, the matriarch and voice of the family, won’t allow for Henry to be anywhere near her family or house. Henry’s desperate desire to fix his wrongs leads him to another unfortunate disaster with Peg.


Fellow Mortals uses the fire to pry off the emotional facade we put up around mere acquaintances and demonstrates the different ways people grieve. The Kanes’s house was only slightly damaged in the fire, but Billy’s resentment toward the mailman, and his desire to converse with his female neighbors about it, exposes a rift in his marriage. Sam Bailey makes one curious decision after another, but lacking direction without his wife, none of his choices seem jarring to the reader. His actions represent the lengths to which we will go to hide from our feelings. Late in the book, one of the characters reflects, “It worries Nan, thinking they’ll be devastated later when the night sets in and they remember who they are.” The characters would all rather hide from their turmoil, or have someone else promise everything will be fine, rather than address their internal struggle.

Mahoney’s novel rapidly shifts the point of view from one character to the next, deftly showing how some people hide in plain sight. The neighbors don’t feel comfortable around Billy Kane. They overhear arguments with his wife, but they easily dismiss them. But once we enter Billy’s point of view, we see him as a sociopath, not an odd neighbor. The shifting focus builds tension that carries us through the book. We know more about the characters than their neighbors know about them, to where we can predict the downfall of each and hang on to watch the unfolding train wreck.

Fellow Mortals is a thoughtful examination on how tragedy can change different people in different ways. But it also reveals how we often avoid confronting the fear and pain that manifests in our thoughts. When Sam Bailey finds himself lost in the forest, he is “thinking to himself, it’s all right, it’s all right, because he doesn’t want to say it out loud.” In Fellow Mortals, we can commiserate with that feeling.

One thought on “Galvanized Yet Undone by a Tragedy: Dennis Mahoney’s ‘Fellow Mortals’”