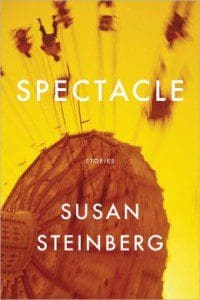 Susan Steinberg’s Spectacle (152 pages; Graywolf Press) is a story collection of intertwining vignettes, a series of experimental narratives that speak to the vulnerability of being female and the roles women are expected to play in a male-dominant world. Steinberg does not cast a rosy hue over her portrayal of society. She writes her truth—her female narrators’ truth—and makes no attempt to censor it. The narrators’ voices blend together, as do the male characters: lovers, fathers, and brothers move in and out of one another until they become indistinguishable.

The opening story, “Superstar,” tells of a woman who breaks into an ex-lover’s car and steals his radio. She had been scorned and is trying to salvage a relationship by possessing the remnants of the man whom she fell too hard for and who forgot about her too easily. “I was young and I didn’t steal the stereo because I wanted the stereo. I stole it rather, because I wanted the guy,” she says. There is nothing for the narrator to do but to watch this man go home with another woman as she is left holding the broken stereo.

In “Supernova” a woman tells us of the loss of her friend in a plane crash. Steinberg’s raw writing style causes the reader to grieve along as the narrator reflects on her loss. Then in the  following story,“Signifier,” Steinberg gets at the heart of her argument: women fill the roles purported by men because it is terrifying to exist in this world without them. Women are often given no other option but to be defined in relation to men. “But there I was, running to catch up with them,” the narrator says. “There I was, some scared-as-shit girl. I was some scared-as-shit child. Running in wrong shoes up the trail. Scared to be left alone.” It feels wrong, it feels demeaning, but the alternative is to be left alone in the woods.

Steinberg’s biting collection cuts deep. Is it still possible we live in a time that is so backward, so repressive of the feminine? Spectacle acts as the voice of the women neglected, abused, stifled, and heartbroken.