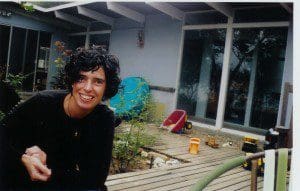 When I met her at the Iowa Writers’ Workshop in 1989, Margaret Weatherford was the California girl the Beach Boys never imagined: a black-haired, amber-eyed bombshell with her own professional pool cue and a dude’s tolerance for rail whiskey. I was her fan before I was her friend, because – if the first rule of writing school is to write what you know – it was obvious that Margaret knew things no one else could have possibly dreamed up. Her stories were populated by melancholy children, oracular father figures, animal grotesques and obsolete muscle cars. Like me, she had just graduated from college, but to read her you’d have thought she’d been circling the canyons and freeways of Los Angeles for centuries, honing a hawk’s omniscient view of its dive bars and roadside alliances, its secretive, peripherally glanced creatures and its inexorable undergrowth, which always seems poised for imminent, impersonal takeover.

As it turned out, Margaret was the rare guys’ girl who was also a steadfast friend to a certain kind of woman, and over the years I was lucky to be around to watch her become a bride, a mother, a published author, an artist’s muse, a first-time novelist: a self-deprecating success at everything she put her mind to. Less than two weeks ago I sat beside her in her canyon-top home as she named me her “literary executrix,” a title she’d scarcely pronounced before she dissolved in laughter, dropping her usual unflappable monotone to shout, “I feel like such an idiot!”