All the News That’s Fit to Be Normalized: Hilary Plum’s ‘Strawberry Fields’ 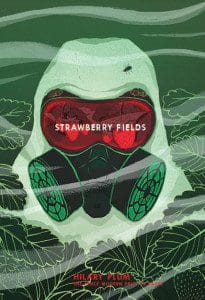 Strawberry Fields (Fence Books; 224 pages), the breathtaking new novel from Hilary Plum, and winner of the Fence Modern Prize in Prose, opens with what might be the common denominator in humanitarian crises around the world: a nameless American at a refugee camp in a nameless country. “The children’s suffering has been unimaginable,” the American begins—as if we did not already know this.

But soon, one of the children is telling the gathered reporters and NGO representatives at the camp what he learned in school: the towns of his country, the names of its leaders, even the locations of rebel supply camps. “Who is your teacher?” the reporters ask, “is she still alive?” The child does not respond. A camp administrator shakes her head. “You don’t think he made her up,” the Swedish journalist says to her, aside. “No,” the administrator says, “but children are easy to fool.”

Within this short scene Strawberry Fields opens its focus, which is not children but adults—namely, journalists, and the virulent scenes of their information. Each three-to-ten-page chapter takes the perspective of a different person reporting on or investigating or sometimes even participating in some event around the world, from the torture of prisoners of war to the calm interior of an eating-disorder clinic. Many of the scenes are tragic, some viscerally so, but none feel out of place. Together they form one of the most astonishing reading experiences to be had in recent years.

END_OF_DOCUMENT_TOKEN_TO_BE_REPLACED 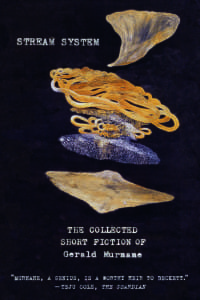 “The writers of the present century have lost respect for the invisible,” says one of the narrators of Stream System: The Collected Short Fiction of Gerald Murnane (560 pages; FSG). “They have tried to describe what they had better have left unreported.” Perhaps we are fortunate, then, that Gerald Murnane has not lost this connection, for his writing is unlike anything being published today. It could be the way Murnane works his prose, filling it with repetitions and pulling out commas so the syntax shines like glass; or it could be something about all these nameless men and boys walking their small parts of Australia, dreaming about women and grass and clouds. In any respect, Murnane is one of the rare few actually working to alter the experience of reading fiction, and it is time his works are recognized more fully in this regard.

Despite an impressive body of work consisting of nine novels, three books of short fiction, one essay collection, and a memoir—as well as the highest praise from writers J. M. Coetzee, Teju Cole, Helen Garner, and Shirley Hazzard—Murnane’s books have mostly been confined to Australia and the United Kingdom. The release this spring in the United States of Stream System and Border Districts: A Fiction (144 pages; FSG) is therefore a major event in the publishing history of this writer and in contemporary literature. In Stream System we have the fullest collection of Murnane’s short fiction to date, giving us access to stories that were difficult or impossible to find before, and in the elegant Border Districts, which Murnane has called the last piece of fiction he will ever write, we have the vantage point to look over his ambitious life work.

Murnane’s fictions are composed like vast diagrams of far-away boxes connected by thin blue lines. For those unfamiliar with his writing, his subjects can be summed up fairly easily. In order of increasing abstraction they are: Catholicism, horse racing, women, fiction, landscape, light. The tone ranges from the reflective to the documentarian, with the extreme on one side resembling the best writing from Beckett and Conrad, and the other sounding a lot like that infamous 2012 report from the US Government Accountability Office about reports about reports that suggests the preparation of a further report about said report. In the harsh but necessary world of jacket copy blurbs it has become commonplace to call someone’s style “unique,” but Murnane really does seem to write differently from anyone else. The best comparison might be an artist like Glenn Gould: substitute features of the basin or plains for the arctic, and the opening line of Gould’s The Idea of North, “I’ve long been intrigued by that incredible tapestry of tundra and taiga which constitutes the Arctic and sub-Arctic of our country,” could easily be the start of a Murnane story.

Murnane does not write for an audience, that much is clear. His repetitive and sometimes off-putting style has borne its fair share of detractors. But unlike most writers in this line, Murnane also does not seem to be writing deliberately away from an audience, or in other words, being difficult for the sake of being difficult. It takes time to see this, but his writing truly does seem to reflect who he is as a person. (Character will out, as they say.) It exhibits humility, curiosity, and a careful, inward intelligence.